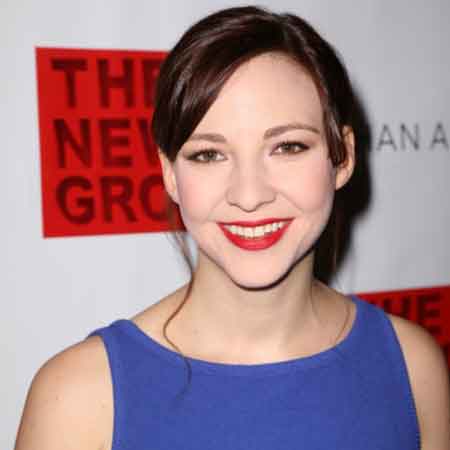 Erin Darke is an American actress popularly known for portraying Cindy Reston in the American period drama web series, Good Girls Revolt which aired on Amazon Prime. She is also the part of movies like Still Alice, Love & Mercy and Don't Think Twice. As of 2018, Darke is appearing in the AMC's American Dark Story series named Dietland which is based on the novel of the same name. She is also known for being the girlfriend of Harry Potter alum Daniel Radcliffe.

Erin Darke was born Erin Constance-Maja Darke on September 10, 1984, in Flint, Michigan, United States. She posses an American nationality and has a white ethnical background. She is the daughter of Ian Darke(father) while her mother name is unknown.

As per education, she has completed her graduation from the University of Michigan in Fine Arts in Theatre Performance

In her early life, she was interested in theatres and worked in theatre for some time. Then at the age of 21, she moved to New York City to pursue her career as an actress.

Erin Darke is professionally an actress who debut in the entertainment industry in 2009. She later made her appearances in movies like Love & Mercy, Still Alice and Beside Still Waters which was all released in 2014.

The following year she was cast in the American period drama web series, Good Girls Revolt which aired on Amazon Prime on October 28, 2016. In the series, she portrayed Cindy Reston who was one of the three main leads of the Television series including actress Genevieve Angelson and Anna Camp.

Later on, she landed in a Comedy movie named Don't Think Twice where she appeared in the role of Natasha.  Her growing popularity eventually led her to be a part of the 2017 Comedy series, The Marvelous Mrs. Maisel where she was cast for three episodes and it also aired on Amazon Prime in March.

CAPTION: Erin Darke as Cindy along with her cast members of series, Good Girl Revolt. SOURCE: US - Wall Street Journal

Her recent release includes AMC's American Dark Story Dietland which is based on the novel of the same name. The first season released on June 4, 2018, with 10 episodes and ended on July 30. In the series, she is joined by Joy Nash, Tamara Tunie, Robin Weigert and Adam Rothenberg.

Erin Darke's net worth is estimated to be $4.56 million which she earns a lot from her career. She has been a part of some movies and Televisions series. For her involvement in the series as a regular character, she is paid a decent salary.

Her movies were able to collect a decent amount at the box office and some of them are listed below:

The couple is together since 2013. There was news about their engagement in the year 2014 but that didn't happen. Whatsoever, both of the actors are focused on their career and are busy with their respective projects.

The pair first met on the sets of Kill Your Darlings in 2013 where they acted together. Daniel and Darke had to shoot an intimate scene together which made him fall for her which he revealed while talking to Playboy Magazine.

While shooting for the series Good Girls Revolt she realized how much her boyfriend Daniel means to her and called him often to say I Love You.  As her character in the series is having trouble maintaining a relationship and as she is playing the character she is thankful she has a good boyfriend in real life who takes good care of her.

As for social media, she is not on Instagram but is active on Twitter having 4.2k+ followers as of August 2018.