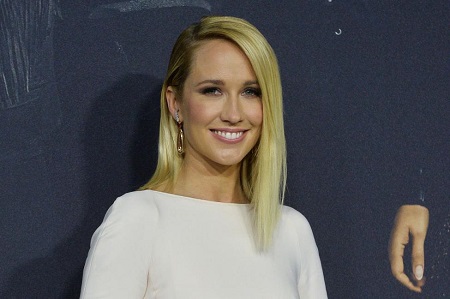 The American actress as well as a singer, Anna Camp is famous for appearing in the series Pitch Perfect and True Blood. Some of her other notable work is in The Good Wife, Pitch Perfect 2, The Mindy Project, and others. Recently, she has filed for the divorce with, Skylar Astin.

Camp went to Meadowfield Elementary School, and later on, graduated from the University of North Carolina with a Bachelor of Fine Arts degree.

Anna Camp made her debut in the Hollywood industry when she was in grade two after appearing in a Drug Abuse Resistance Education production. Later on, in 2005, she worked in Columbinus. And for her Off-Broadway play, The Scene, she got nominated for Lucille Lortel Award.

Camp made her big screen debut with the movie, And Then Came Love in 2007. Later on, she has appeared in the several films and TV series including  Reinventing the Wheelers, Glee, Cashmere Mafia, The Office, and many others.

Her most notable work in the series, True Blood (2008-2014) for which she was able to bag Satellite Awards. She is also better known for portraying the role in Pitch Perfect and its sequel.

The actress Anna Camp, who has been contributing to the Hollywood industry for more than a decade, has a net worth of around $3 million.

Anna and her husband, Skylar, has placed their Los Feliz house for sale in $2.6 million. The house is styled in Spanish-style and made in 3,200 square feet. The couple bought the house for $1.98 million in 2016.

The 36 years old, Anna Camp has married twice and both of her marriage went unsuccessful. Recently, she has filed for the divorce with, Skylar Astin. The couple started dating after they worked together in the Pitch Perfect and got engaged in January 2016. In the same year, they got married on September 10, 2016. 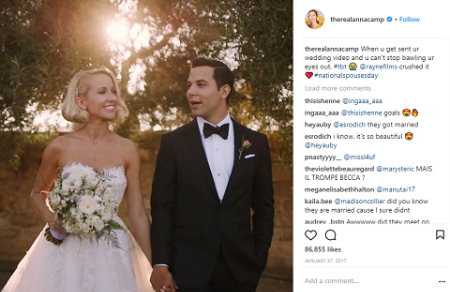 Previously he was married to actor Michael Mosley. The former couple tied the knot in 2010 after being engaged in 2008. However, they ended their relationship with divorce in 2013.

Once she has revealed that she was sexually harassed in the set of Good Girls Revolt. In 2017, she was involved in the death hoax, which later on turned out to be false. In the same year, she was also rumored to be pregnant, but it was also proved wrong.