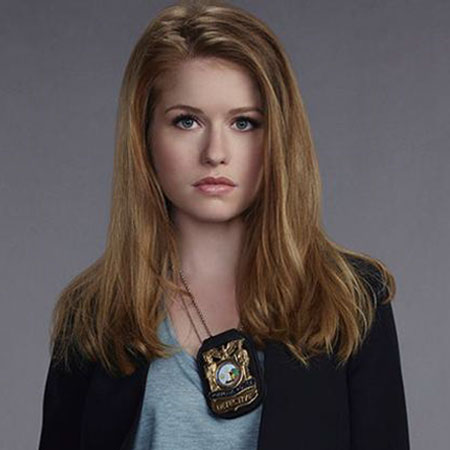 Genevieve Angelson is an American TV actress best known for portraying the role of Caitlin Hobart on the Showtime network's House of Lies. The actress has deserved credit for portraying the role of Det. Nicole Gravely on the Crime comedy-drama television series Backstrom and Patti Robinson on Good Girls Revolt. Similarly, the actress also landed many other breakout role in movies and TV shows like Spare Room along with Skyler Samuels, Martin Sensmeier, Cole Sibus and Virginia Madsen.

Who Is Genevieve Angelson?

The 32-year-old Genevieve Angelson was born on April 13, 1987, in New York City. She holds an American nationality and belongs to white ethnicity.

Angelson is the daughter of mother, Lynn Angelson, and father, Mark Angelson. Her father is a lawyer and a businessman. Angelson grew up with her two elder sisters Jessica and Meredith Angelson in the Upper East Side of Manhattan and London.

She Is A Wesleyan University Graduate

Angelson attended the Wesleyan University where she graduated Phi Beta Kappa. She also received The National Board of Review Charlie Andrews Award for her college Thesis in 2008.

Angelson always wanted to become an actress so. In the year 2012; she enrolled at Tisch School of the Arts where Angelson graduated with MFA in acting.

Later, she attended the Northwestern University and completed her Cherubs program.

After completing her graduation, Angelson first appeared in the American drama television series Army Wives as Heather. The same year, she also got the role of character Rose in Open Five.

The next year, Angelson portrayed the role of Det. Nicole Gravely in the American crime comedy-drama series Backstrom for a short period; from January 22 through April 30, 2015.

In addition to that, Angelson has also portrayed the role of Nina in 'Vanya and Sonia and Masha and Spike', the Tony Award for Best Play winner at the 67th Tony Awards.

In 2019, the actress appeared in a TV series Flack and Titans.

Genevieve Angelson's current net worth is $1 million, according to some reliable online sources. She has collected such an impressive amount of money from her work in movies and TV shows. The average salary of an actor is more than $56k.

The Backstrom actress, Genevieve Angelson is not married yet. As of April 2017, Angelson was rumored to be in a relationship with her mysterious boyfriend. Her tweets direct that she is dating someone.

Some of the tweets even indicate to have spent time with her love. She even tweeted that her boyfriend is romantic and he always makes her feel special.

Angelson is an avid lover of animals and has a pet dog. She spent lots of time with him and says she loves him a lot.