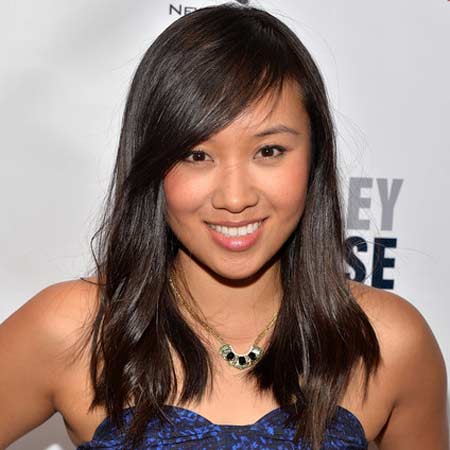 Ellen Wong is a Canadian actress who made her debut in Scott Pilgrim vs. the World as Knives Chau (Chinese-Canadian high-school girl). Her performance in the movie helped her to receive a nomination for Scream Awards. Wong also featured as Jill ‘’Mouse’’ Chen in The CW’s series The Carrie Diaries and Jenny Chey in Netflix’s TV series GLOW.

Ellen Wong was born on 13th January 1985 in Ontario, Canada under the birth sign Capricorn. Wong is the daughter of Chinese Cambodian parents who moved to Canada during the Cambodian genocide. She has two sisters.

Wong attended L’Amoreaux Collegiate Institute where he performed at several community theaters. At the age of 14, she worked in a variety of TV production jobs. She then joined St Stephen’s College and later graduated from Ryerson University.

The number of audiences praised her performance in the movie and she also received a nominated for Scream Awards in the category of Best Supporting Actress.

The following year, Wong worked as Daiyu in the short film, Silent Cargo. She has also been nominated for ACTRA Awards for her performance in the movie. Her latest movie includes 2017's The Circle starring Emma Watson and Tom Hanks.

In 2005, Wong made her television debut as Amy Li in CBS’ TV series, This Is Wonderful. She then worked in Runaway, Unnatural History and Combat Hospital. In 2013, she worked as Jill ‘’Mouse’’ Chen in The CW’s teen comedy-drama The Carrie Diaries with AnnaSophia Robb, Austin Butler, Katie Findlay, and Stefania LaVie Owen among others.

Wong worked in several TV series, particularly, she is famous for her role in GLOW.

Ellen Wong has accumulated an impressive amount from her acting career. As of 2018, her estimated net worth can be assumed to be in thousand dollars, however, the amount is still under review.

Ellen Wong is private when it comes to her dating life and relationship. She prefers to keep her love life low key. Scrolling her Instagram account, she posts several pictures with film director Adam Azimov.

They were also spotted vacationing together at several places. Though, there are many speculations about them dating, the alleged couple, however, has not confirmed the relationship.

Sending birthday hugs and kisses to the best partner in crime a gal like me could ever ask for! @adamazimov Cheers to another year filled with more fun, more love...more life!!!

Wong can speak several languages including English, Mandarin, Khmer, Chinese, Cantonese, and Taishanese. Some of her hobbies include traveling, hanging out with friends, and watching movies.

Besides, Wong is a dog lover and supports animal rescue and animal adoption organizations.

Here is the video where Ellen Wong talks about the series GLOW: