Eden Riegel is an American actress best known for playing the role of Bianca Montgomery in the ABC daytime drama series, All My Children.

She has been married to actor Andrew Miller who is also the web series, Imaginary Bitches. The two are parents of two sons.

Eden Riegel was born as Eden Sonja Jane Riegel on January 1, 1981, in Washington, the United States, to father Kurt Riegel and mother Lenore Riegel. Her parents are now divorced.

Her mom is of Hungarian Jewish and German Jewish ancestry while her dad is of German and English descent. She was raised along with her elder brother Sam Riegel who is a voice actor and director. She also has a half-sister Tatiana S. Riegel.

She developed her interest in acting watching her brother while he was performing in theaters. She joined a theater at the time and was getting paid $10 a week.

Acting Career: "All My Children" Appearance

Eden Riegel did a breakthrough performance as Cosette in Les Misérables after which she got many other roles on and off-Broadway.

In July 2000, she joined the cast of the ABC daytime soap opera, All My Children.  She played the role of Bianca Montgomery in the ABC series alongside Cameron Mathison, Walt Willey, David Canary, Cady McClain, Susan Lucci and Jill Larson.

Being a successful soap opera actor, Eden Riegel makes a substantial amount of money. The 38-year-old star an estimated net worth of $1 million, according to online sources.

The exact annual salary of the soap opera star is unknown. However, some online sources have reported that actors or actresses who appear on a soap opera for 5 to 10 years earn $1500 to $3000 per episode.

As we mentioned earlier, Eden Riegel has been married to a Canadian actor Andrew Miller. Andrew is the creator of the web series, Imaginary Bitches. 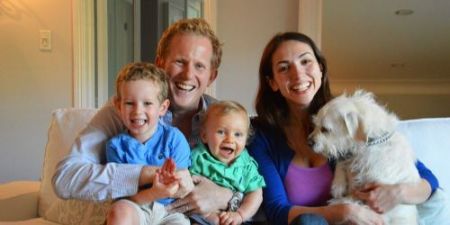 CAPTION: Eden Riegel and her husband Andrew Miller with their children SOURCE: whosedatedwho

The couple became engaged in March 2007 and on September 30 of the same year, the two tied the knot. The husband-wife duo is blessed with two children; son Jack Oscar Miller (born on May 21, 2011) and Henry Isaac Miller (born on December 20, 2013).