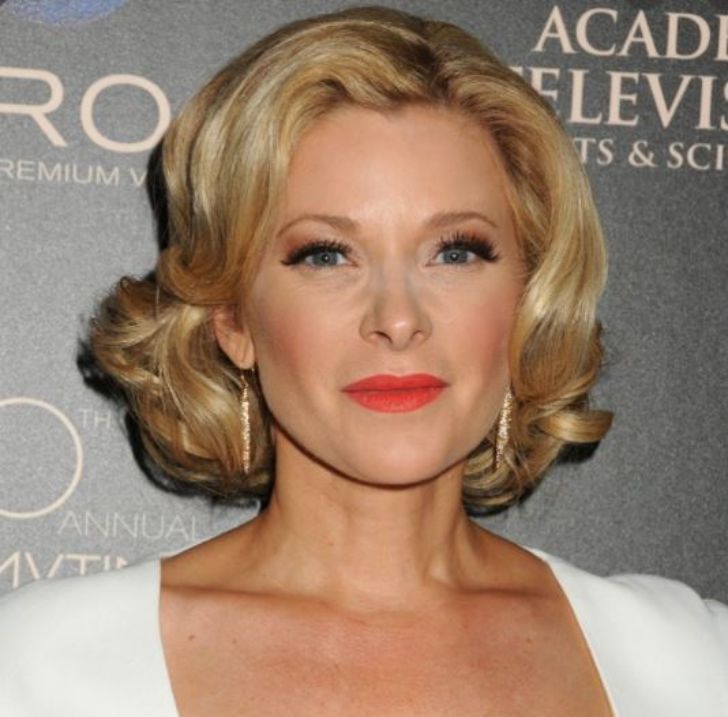 Cady McClain, an American actress first made her on-screen impression with commercials at a young age that led her into TV prominence later. After her work in the Emmy-winning TV film Who Will Love My Children? (1983), McClain's path to success opened up; she got notable TV credits in All My Children, As the World Turns, The Young and the Restless, and Days of Our Lives.

Aside from acting, she has showcased her flair as an author and singer too.

How Old Is Cady McClain?

Born on October 13, 1969, in Burbank, California, the United States, McClain is an American by nationality. Her birth name is Katie Jo McClain. Further information on her parents or family background is yet to be out, but indeed her parents were her big supporters to ladder her from commercials at a young age to acting.

Early Career In Commercials and Theatres

At the age of 9, McClain worked in the commercial for Band-Aid bandages in 1978. Soon, she appeared in commercials of McDonald's, Amtrak, Kenner's "Strawberry Shortcake" dolls, Barbie, Maybelline, Shout Detergent, Apple Kool Aid, and McCain's Chicken.

Moreover, she also branched out to acting & initially worked in theatres, has since starred in the productions: The Music Man, Finian's Rainbow, Wait Until Dark, and Dames at Sea. Further stage appearances were in A Little Night Music, Comedy of Errors, Barefoot in the Park, Inventions of Farewell, and The Red Address.

In her early days, Cady McClain saw a recurring role on St. Elsewhere (1983-85), and then at 16, was cast in Cheers. It was in 1982 when she made her film debut through the Emmy Award-winning TV film Who Will Love My Children opposite Ann-Margret.

After guest roles in One Big Family and Cheers, the California-born portrayed Dixie Cooney in the TV series All My Children (1989- 2011, 571 episodes), then later would appear in 43 episodes in 2013. There she shared the screen with Susan Lucci, David Canary, Cameron Mathison, Walt Willey, James Mitchell & more.

Then, her on-screen prominence enlarged even more after she landed Rosanna Cabot in As the World Turns (2002-2010, 210 episodes).

From 2014 to 2015, she portrayed Kelly Andrews in The Young and the Restless starring Doug Davidson, Eric Braeden, Peter Bergman, among others, and then worked in Venice the Series (2016-17).

Most recently, Cady appeared as Jennifer Horton Deveraux in the TV soap opera Days of Our Lives (2020-21) where acclaimed figures such as Deidre Hall, John Clark, Frances Reid & Kristian Alfonso have worked.

Personal Life Of Cady McClain- Who Is She Married To?

While growing up McClain moved to places  Laguna Niguel, Newport Beach, Irvine, and Los Angeles throughout the United States. Then, she moved to New York at 17 and returned to her homecity Los Angeles in 2012 after 25-years.

Speaking of her relationship, the All My Children actress is currently married to Jon Lindstrom, an American actor, writer, and musician. They had been in a relationship since 2008 and got engaged in December 2012.

The duo married on Valentine's Day in 2014. Since they are together, though, do not share any children of their own.

Cady is the second wife of Lindstrom. Earlier, he was in a marital relationship with American actress Eileen Davidson for 3 years (m. 1997- div. 2000).

Currently, Cady McClain divides her time between New York, Los Angeles, and New Orleans. She is an avid Instagram user (@cadymcclain) with over 12.7K followers while her Twitter (@CadyMcClain) has more than 30.9K followers as of 2021.

Aside from being an acclaimed actress, she is also an author of books of poetry: Conversations with the Invisible, and Licked. She released a memoir "Murdering My Youth" in 2014. McClain is also pa s sionate about music and has two albums done; Blue Glitter Fish (2006) and live album Club Pa s sim (2010).

While not working on-screen, she commits her time to charity. The actress is a member of the Junior Board of the Enterprise Foundation and has an a s sociation with RARE.

Active in the acting industry since the 80s, Cady McClain had notable screen time of TV soap operas All My Children, As the World Turns, The Young and the Restless, and Days of Our Lives. According to online sources, McClain has an estimated net worth of $3 million in 2021.

Most of her earnings came from the on-screen venture, but also thanks to her early days in commercials & advertisements that set the path to on-screen prominence. Allegedly, she makes a salary in the 6-digit figure per year.