The Duchess of Sussex, Megan Markle reportedly attended a secret baby shower from her close pals in New York City this mid-February. Markle, who is expecting her first child with her husband Prince Harry, went on the first visit to NYC since her marriage last summer.

As per the report, Megan Markle and Prince Harry will be welcoming their little bundle of joy in two months from now. 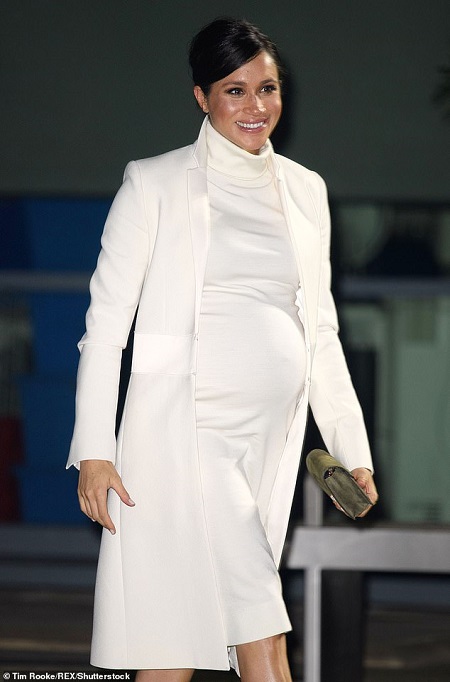 According to the close source, Meghan's friends threw her a baby shower before she heads back to London.

As per Harper's Bazar, the 37-year-old former Suits actress flew to NYC on Friday, February 15 for a 5-days-nights trip which included shopping, good food, and a baby shower with 15 of her closest friends.

The representative of the duchess reported that the trip was planned months ago and further added:

The trip is a lovely chance to catch up with friends and spend time in a city she loves. This will be the last time a lot of them will see Meg until after the baby is born so it’s nice to share precious moments.

On the trip, she was joined by Jessica Mulroney for her visit of Laduree in New York's SoHo district on Saturday, 16th February for good food. People reported a source close to the Duchess told,

It’s been a relaxing visit. Nothing beats face time with your friends. Meg will be flying home refreshed and relaxed—and with a lot of new baby clothes.

After Meghan returns back to London, she is set to take her last flight before the birth of her child. The Royal couple is scheduled to head to Morocco, northern Africa from 23rd to 25th February.

Before, the Royal couple went to their 16-days long official visit to four Oceanian countries; Australia, New Zealand, Fiji and Tonga. It was their first official visit since their marriage on May 19.

The royal couple exchanged their vows at the fairytale wedding at Windsor Castle in front of more than 100,000 well-wishers.

The Bride, Markle wore a white gown - with a white veil and boat neck designed by British designer Clare Waight Keller. Meanwhile, Prince Harry opted for a frockcoat uniform of the Blues and Royals on his big day.

The pair, who first met on a blind date in July 2016, went to Alberta, Canada's Fairmont Jasper Park Lodge for their honeymoon.