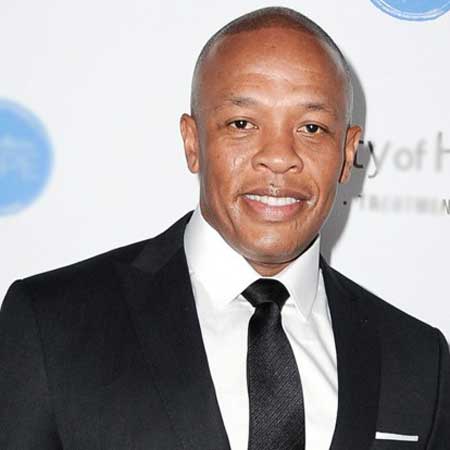 Dr. Dre, an American rapper, record producer as well as an entrepreneur, is the founder and current CEO of Aftermath Entertainment and Beats Electron

Previously, Dre was the former co-owner and artist of Death Row Records. He also produced the albums for and overseen the careers of many rappers such as Xzibit, Snoop Dogg, Eminem,  Knoc-turn'al, 50 Cent, The Game and Kendrick Lamar.

Dr. Dre was born as Andre Romelle Young on February 18, 1965, in Compton, California. He belongs to Black American ethnicity and holds an American nationality.

Young is the first son of Theodore Young and Verna Young who were married in 1964, separated in 1968, and divorced in 1972. Later, his mother married to Warren Griffin and had three children; two sons Tyree and Jerome(both deceased) and daughter Shameka.

Young attended the Vanguard Junior High School in Compton, but due to the gang violence, he transferred to the safer suburban Roosevelt Junior High School. During his middle schools days, he lived in Carson for few years. Dre raised by his grandmother in the New Wilmington Armed housing project in Compton.

Dre joined the Centennial High School in Compton but transferred to Fremont High School in South Central Los Angeles due to his poor grades. He attempted to enroll in an apprenticeship program at the Northrop Aviation Company, but poor grades at school made him ineligible.

Young began his career as a part of the World Class Wrecking Cru and later found publicity with the influential gangsta rap group N.W.A with MC Ren, Eazy-E, Ice Cube,  and DJ Yella, that spread the use of explicit songs in the rap to detail the violence of street life.

Dre’s 1992 solo debut The Chronic, released under the Death Row Records, led him to become one of the best-selling American accomplishing artists of 1993 and to win the Grammy Award for a single "Let Me Ride."

In 1996, Dre left the Death Row Records to establish his label, Aftermath Entertainment. He produced a compilation album titled Dr. Dre Presents the Aftermath in 1996, and released a solo album titled 2001 in 1999.

Early in 2000, Dre focused on the production of other artists, while occasionally contributing vocals to songs. He signed Eminem in 1998 and 50 Cent in 2002 to his record label respectively, while contributing production on their albums.

Dre has won six Grammy Awards, including Producer of the Year. He has also had acting roles in movies such as The Wash, Set It Off and Training Day. Rolling Stone ranked 56 on their list of "100 Greatest Artists of All-Time".

Dr. Dre is currently married to Nicole Young since May 1996. Young is an attorney and has left to work now. She was married to NBA player Sedale Threatt and was still married when she had an encounter with Dr. Dre.

Dr. Dre proposed her while she still was in a marital relationship. Young accepted his proposal, got married and are still together even after two decades. The couple has two children together; son Truce born in 1997 and daughter Truly born in 2001.

Dr. Dre’s first known affair was with Cassandra Joy Greene in 1980 but spilled up in 1983. He has a son named Curtis Young with her. The same year he dated Lisa Johnson and broke up the next year. Dr. Dre has a son La Tanya Danielle from her born in 1983.

Moreover, he has dated Michelle, Jenita Porter later. He also has sons Andre and Marcel born from Jenna and Michelle respectively and one more daughter Tyra young. His son Andre passed away due to a drug overdose in 2008. Currently, Dr. Dre and his wife Young live with their children in California.

The 52-year-old rapper Dr. Dre's net worth is calculated to be around $830 million, according to the sources. He accumulated his wealth through his extensive career as a producer, DJ, rapper, entrepreneur as well as an actor.

In 2011, he sold 50% stakes in Beats electronics, headphone company to Taiwanese smartphone company HTC for $310 million. In 2014, Beats Audio was bought by Apple for $3 billion, making him as the richest man in hip-hop surpassing Diddy and Jay-Z.

Reportedly, he earned $650 million before taxes and that time his net worth instantly hiked to around $810 million.
In 2014, he bought a lavish mansion on $50 million in Brentwood house.

The property features 14000-square-foot five-bedroom home from scratch.  In 2015, he sold his Hollywood Hills for $32.5 million. He travels in his million-dollar private jet. He drives various cars including Hummer ($53K) and Crysler ($75000).