The Game is a noted American rapper who has had an active presence in the industry since 2000 and has released various songs that have helped him gain fame and a massive amount of money. Some of his notable songs are The Documentary, Doctor's Advocate, The R.E.D. Album, and Born 2 Rap. Besides, he has also appeared in a few movies and tv series, including Waist Deep and Street Kings.

The Game is the stage name of Jayceon Terrell Taylor, who is a rapper and actor of American nationality known best for his contributions to the West Coast hip hop scene. Besides, he is also one of Dr. Dre's most notable protégés and was born on November 29, 1979, and reportedly grew up in a dysfunctional family. His rapping skills and musical endeavors have made his bio and career details searched by fans worldwide.

He was born in Los Angeles, California and had a troubled childhood. His father reportedly molested his sisters, and his parents were cocaine and heroin addicts. He was raised in foster care at seven years of age. He later moved in with his mother and later attended Crompton High School.

After graduation, he got a position at Washington State University but was kicked out. He embraced the thug life, sold drugs and was involved in gangs. He had even been shot and reached a coma due to it. At this time, he pursued an interest in music and studied rap albums during his bad health. With his brother Big Fase, and gained prominence in the hip hop summit hosted by Russel. The brothers made a mixtape and signed a record deal with Get Low Recordz.

After being found by Sean Combs, The Game was later discovered by Dr. Dre, who signed him to the Aftermath Entertainment label in 2003. Inters cope Records made The Game, 50-Cent and G-Unit work together and rose to fame. He made a name for himself due to his attitude and released the albums named Documentary ON 2005 and Doctor's Advocate in 2006, which were certified platinum by RIAA. He has been known to be the driving force behind the West Coast hip-hop scene. 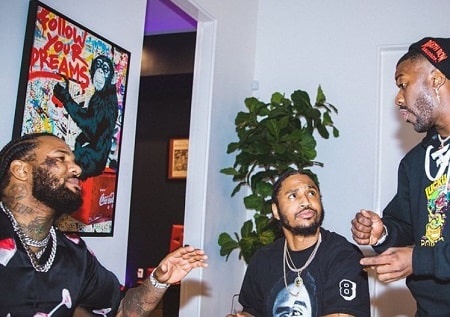 CAPTION: The Game enjoying his time with his friends SOURCE: Instagram @losangelesconfidential

In November 2020, he returned with the Lil Wayne-assisted "A.I. with the Braids," his first single since Born 2 Rap. And now, he is working on his new projects. Apart from his rap and movie works, the Game has also made appearances in television shows. He appeared on the dating television show Change of Heart in 2000.

He also founded a new record label, Rolex Records, along with rapper Stat Quo in December 2012.

Personal Life: Take A Look At His Love Life

The Game now leads a single, but he dated Tiffany Webb in 2004, and the couple was together until 2012. Mya was known to be dating The Game in 2005, after which Keyshia Cole was also rumored to have had a relationship with him.

India Westbrook was his girlfriend from 2014 to 2015, after which he was rumored to be with Karrueche Tran in 2015. Indya Marie was in a relationship with him in 2015. Furthermore, he has already become a father, and his children are California Dream Taylor, Harlem Caron Taylor, and King Justice Taylor.

The rapper has amassed most of his gains from his active work in the music field. Celebrity Net Worth reports his net worth to be around $10 million. Apart from that, he makes money from sponsorship and endorsement deals. And his estimated income from a single sponsored post on Instagram is around $24,717 to $41,195, according to Influencer Marketing Hub.