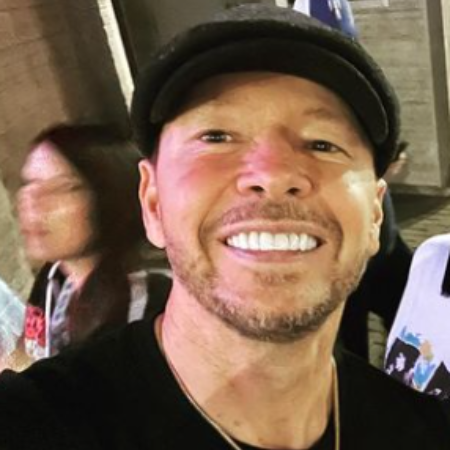 Emmy Award-nominated legendary American singer and actor, Donnie Wahlberg rose to fame after becoming the founding member of the body band, New Kids on the Block. He along with his members released several albums and songs which entered the Billboard charts and made impressive sales. Besides, Wahlberg is also involved in acting. He worked in several hit movies and TV series. Similarly, the talented person is engaged in several charity works. Regarding his personal life, Wahlberg has been married twice. He shares two children with his first wife. The couple divorced after living together for almost 2 decades. In 2014, he married for the second time with an actress, Jenny McCarthy.

Donnie Wahlberg was born on 17th August 1969 in Boston, Massachusetts, the United States of America under the birth sign Leo. Wahlberg is the son of Alma Wahlberg and Donald Edmund Wahlberg Sr. His mother, Alma was a bank clerk whereas his father, Donald was a teamster who died in 2008. His parents divorced in 1982. After the separation, he started living with his mother.

?Happy Birthday Mom!? ?The one true #RockStar in the Wahlberg family.? ?#HappyBirthdayAlma?

Though the family was close, the siblings used to have frequent arguments. He said,

''We'd fight over clothes, or who had the prettier girlfriend, which of us was the best athlete, stuff like that.''

At the age of 15, in 1984 Donnie Wahlberg's friend inspired him to audition for famous music producer, Maurice Starr who was organizing an open audition to create a new boy band of white teenagers.

After a number of the audition, Starr became impressed with Wahlberg's singing, dancing, and rapping talent. Later, she recruited his brothers Mark & Danny and a friend, Jordan Knight plus Knight's brother, Jonathan Knight. Being unhappy with the band's pop-friendly artistic direction, Mark left the group and was replaced by Jamie Kelly. Later, Kelly was also replaced by Joey McIntyre and formed the group, New Kids on the Block.

On 1st April 1986, the group released their debut album, New Kid on the Block. After the failure of their first album, they released the second album, Hangin' Town which hit #1 on US Billboard 200 charts.

Back to back, they released several albums and songs which entered the Billboard charts and sold numerous copies in the market.

Wahlberg made his acting debut in 1996 as Big Balls in Julien Temple's crime film, Bullet starring Mickey Rourke and Tupac Shakur. The same year, he worked in Ransom and Black Circle Boys.

Moreover, the actor made her TV debut as Mr. Grey in the TV movie, The Taking of Pelham One Two Three. Following his debut, he worked in several movies and TV series from where he earned a huge appreciation and fan following. Since 2010, he is portraying the role of Detective Daniel Reagan in CBS' police procedural fictional drama series, Blue Bloods. The series starred Bridget Moynahan, Will Estes, and Len Cariou.

His recent work includes comedy TV series, Return of the Mac as himself starring Jamie Denbo and Adam Ray. Besides, his work helped him to get nominated for Emmy Awards twice.

How Rich Is Donnie Wahlberg? Net Worth And Charity

As per some sources, Wahlberg earns million dollar salary from his multiple careers. The actor worked in number of movies with an impressive box office collection. Here is the list of his hit movies:

Moreover, Wahlberg also earns much from his music career. Here is the list of his albums with their copies sold:

Besides, Wahlberg has a mansion in St. Charles. He also owns several cars like Mercedes Benz and Ford worth $ thousand. The famous actor is involved in several charity works. He supports Generation Rescue which is a movement dedicated to providing treatment opportunities to autism families.

Additionally, the singer is followed by 1.6 million people on his Instagram account and his estimated earning per post is $3309- $5515 with an engagement rate of 0.99%. He regularly posts on his Instagram glimpses of his personal and professional life.

Wahlberg has been married twice. At first, Wahlberg married his first wife, Kimberly Fey on 20th August 1999 in a private ceremony attended by families and friends. The couple had an affair for around eight and half years before getting married.

After living together for nearly two decades, the couple decided to get a divorce in 2008 and it was finalized on 28th September 2010. Following their separation, his ex-wife won the custody of their children.

Furthermore, after their separation, Key remained single, whereas, Wahlberg started his relationship with an American actress girlfriend turned wife, Jenny McCarthy in 2013.

The following year, the couple tied the knot at the Hotel Baker in St. Charles, Illinois in an intimate ceremony that lasted for only 20 minutes. In the wedding, Wahlberg wore a black Reiss tuxedo whereas the bride wore a sweetheart neck gown.

The pair decided to have no children as Wahlberg already has two children from his previous marriage whereas McCarthy also has a child, Evan (born in 2002) who was diagnosed with autism. Evan is the son of actor John Mallory Asher with whom McCarthy married in 1999 and divorced in 2005. Besides, the singer is happily married to his second wife with no sign of separation. Also, the artist shares a healthy relationship with his co-workers. He is often seen having fun on stage with his friends.

Besides, the multi-talented personality, Wahlberg was charged with first-degree arson in 1991 for setting a fire at a hotel in Kentucky. At the time, he was considered a ''bad boy'' in his band and was partying with his fellow. Later, he poured vodka into the hallway and set the fire.