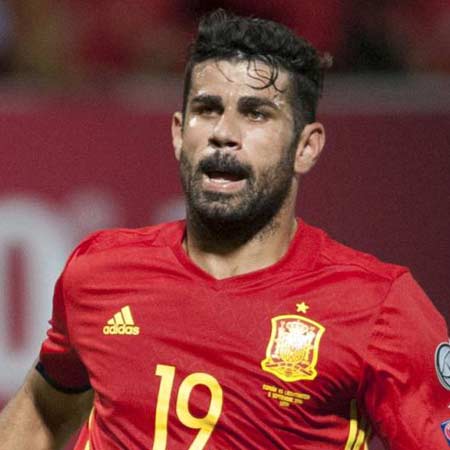 Some know him as the bad boy of football while others know him as a friendly fun loving guy whereas media often show him as a troubled person to the general public. It is still not quite clear to mainstream people who the real Diego Costa is but one thing is sure that he is a beast in the pitch. He made quite a remarkable transition from growing up in a poor family of farmer parents to one of the deadliest strikers in the world. He is aggressive and often tries to drag his opponents by distracting them on the pitch and is a natural goal scorer. From his birth, he was subject to controversy as he was named after Argentine footballer Diego Maradona. Later he changed his nationality and played for Spain instead of Brazil.

Diego da Silva Costa known as Diego Costa was born on 7th October 1988 in Lagarto, Brazil to father, Jose de Jesus, and mother, Joselide. Though being a Brazillian he was named after the Argentine legend Diego Maradona.

At the beginning of his childhood years, Costa used to play street football but never thought about being a professional footballer. His trial at his hometown club was an unsuccessful one.  After his move to Sao Paulo, he started working at his uncle's store who had connections in Football. It was his uncle Jarminho who recommended his nephew to give a trial at Esportivo Capela. After a brilliant performance in his trial, he was selected for Barcelona Esportivo Capela from where his professional soccer career started.

His first European club was  Braga of Portugal but was eventually loaned to Penafiel to get more first-team experience. He scored 5 goals in 13 appearances for Penafiel.  Costa was then transferred to Spanish side Atletico Madrid in 2007. He was sent on loan to various other clubs including Celta Vigo and Albacete to get more experience as a player.  FC Barcelona was interested in Costa but instead,  Costa was sold to Valladolid which included buy-back option of  $1.17 million. In his one year at Valladolid during 2009/10 season, he scored 8 goals in 34 appearances.

He again returned to Atletico Madrid as they triggered his buy-back clause.  He remained at Atletico Madrid for next four years which included a loan spell at Rayo Vallecano. However, 2013/14 can be considered as the breakthrough season for Diego Costa in which he scored 36 goals in 52 appearances as Atletico were crowned La Liga Champions and also reached the final of UEFA Champions League.

Diego Costa was transferred to English club Chelsea FC for a fee of $42 million.  He started his Chelsea career at high, scoring a goal on his debut league match against Burnley in a 3-1 win and was awarded, Player of the month for August.

During his first season at Chelsea, he had some injury issues but scored 20 league goals in just 26 appearances and was included in PFA team of the year as Chelsea won the league title and Carling Cup.  His second season 2015/16 at Chelsea saw a dip of form as Chelsea finished 10th at the table.  He scored 12 goals in 28 appearances for Chelsea.

Diego Costa did not play for Chelsea in 2017/18 season and was finally transferred to his former club Atletico Madrid for a fee of $76 million but was unable to play until January as Athletico faced six months transfer ban. On his return to Atletico Madrid, he played his first game against Lelidua Esportiu in Copa del Rey and scored just after 5 minutes coming as a substitute.

Diego Costa currently plays for Spanish national team but his first International appearance was for Brazillian National team. He made his debut for Brazil in a friendly match against Italy in a 2-2 draw. However, he switched his nationality to Spain debuting on 5th March 2014 in a 1-0 win against Italy and is also included in 23 man Squad of Spanish National team to represent in the FIFA World Cup 2018.  He started in the first group game against the Netherlands which Spain lost 5-2. In the second game, he was substituted for Fernando Torres while in the third game he was an unused substitute as Spain were knocked out at the group stage.

Costa scored his first International game in Euro 2016 qualifier against Luxembourg on October 12, 2014. However, he did not make it to the final 23 man squad for Euro 2016.

Diego Costa started his career from the bottom but now earns around $11 million per year as a salary from his club Athletico Madrid. Costa's estimated net worth is around $40 million in 2018.  During his time at London, he owned a lot of cars including Mercedes, BMW and Range Rover.  However, he later auctioned his car when he moved back to Madrid.  He is endorsed by Adidas.

Unlike other footballers, Diego Costa likes to keep his charity work secret as possible. In his hometown, he owns football complex by his name which helps hundreds of children to fulfill their footballing dreams.

Diego Costa is not married yet. Previously he was in a relationship with Brazillian model Michel Zuanne. However, the pair separated as Costa was linked to her younger sister Naina.

Diego Costa's father Jose de Jesus was a farmer and did everything in his power to fulfill his son's dream. Costa also has an older brother named Jair named after Brazillian player Jairzinho.  Both of them played in the same club during teen years but his brother could not make a breakthrough in professional football.  He also has a bio published titled Diego Costa: The Art of War.

Diego Costa is an aggressive player in the pitch and has been subject to a lot of controversy on the field especially during his time in England. He received several violent conducts charges from England's FA and was suspended in many matches due to his activities on the field.  His major feuds on the field were with players such as Pablo Zabaleta, Gabriel Paulista, John Oshea, Martin Skrtel, Emre Can, David Luiz and Ryan Shawcross.

He also had a feud with Manager Antonio Conte during his time at Chelsea for which he was put on the transfer list.  Later he remained AWOL(absent without leave) for Chelsea despite being included in 23 man squad in 2017/18 season.