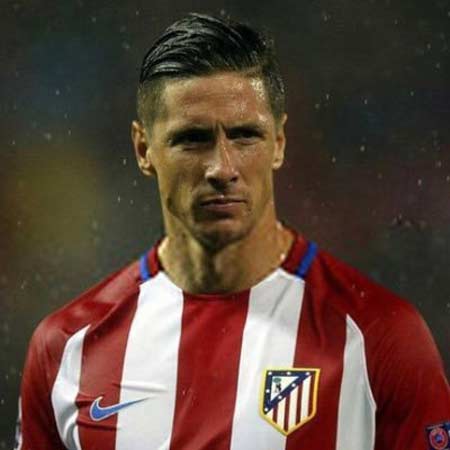 Fernando Torres is tipped as one of the best central strikers of the generation who currently plays both for Spain national team and Atletico Madrid as a striker. The real limelight came in his career when the striker scored 6 goals during the 2002 UEFA European Under-19 Championship in only five appearances. He has also played for a number of world-renowned professional football clubs including Atletico Madrid, Liverpool, Chelsea, and Milan. He has scored 38 goals in a 110 appearance for Spain. The footballer was a recipient of the UEFA Euro Golden Boot in 2012 as well as won the FIFA Confederations Cup Golden Shoe.

Fernando Torres was born Fernando José Torres Sanz on March 20, 1984, in Fuenlabrada city of Madrid, Spain. He is the youngest of three children born to José Torres and Flori Sanz. He holds Spanish nationality and regarding his ethnicity, he is Caucasian.

Torres discovered his love for football at a very early age of 5 and joined his first team Parque 84 and gradually developed his skills playing local football tournament. He started playing as a goalkeeper and then began playing as a striker for the neighborhood club, Mario's Holland.

The footballer moved to Estorde, Galicia along with his family, in 1992. And at the age of 10 where he went on to play for the Rayo 13 team and scored 55-goal within the season. Following his impressive performance at such a tender age, he became one of three players of this club to earn a trail with Atletico. He impressed the scouts with his insane techniques which gained him further attention. He was finally inducted into the youth system of the club in 1995.

Torres made his first breakthrough after he won his first important youth title Nike Cup, playing for the Athletico under-15 team, in 1998. He started his career professionally the following year after he signed a contract with Athletico. He made his debut for the Honor Division when he was 16.

During his career with the club, the striker scored 82 goals in 214 league matches. He later made his transfer to arch-rival Liverpool when Atletico and Liverpool agreed on an alleged fee of £25 million for Torres. He made his debut for the club in a competitive match against Aston Villa in a 2-1 win, on August 11th, 2007.

On 25 September 2007, Torres scored his first hat-trick in a 4-2 win over Reading in the League Cup and another came in a 4–0 victory over West Ham United after a year. For his impressive technique and vision, he was shortlisted for the FIFA World Player of the Year 2008 award but was finally placed third behind Cristiano Ronaldo and Lionel Messi.

In 2009, Torres played in the Premier League scoring his 50th goal for the club making him one of the fastest players to score the 50th goal in the league. In a total 102 appearance for the club, he scored more than 65 goals. After a five-year-long a s sociation, he joined the world's top flighted club, Chelsea signing a five-and-a-half-year contract for an undisclosed fee reported to be £50 million, on 31 January 2011. He also set a new record for the English transfer becoming the sixth most expensive footballer.

Torres played in the 2012 UEFA Championship League Final against Bayern Munich for the club and after a 1-1 draw, Chelsea defeated Munich in the penalty shoot-out 4-3. His first full 2011-12 season at Chelsea ended with 11 goals in 49 appearances.

On October 27, 2013, Torres scored the winning goal and helped his team emerge victorious in the last minute in the Premier League against Manchester City. After a year,  Torres transferred to the Italian Serie A club Milan on a loan of two-year.

At the end of 2014, it was announced that Torres is going to join his first club Atletico Madrid on a season-long loan. He registered his 100th league goal in Spanish football, on July 5th, 2016, playing against Leganés.

Fernando Torres made his international debut in February 2001 and represented his country Spain winning the European Under-16 Championship. He likewise finished as top scorer as well as named player of the tournament.

In July 2002, he also led the team to win the 2002 UEFA European Under-19 Championship becoming the only goalscorer in the final. The player again became top scorer. He made his first senior appearance for Spain on 6 September 2003 playing in a friendly match against Portugal.

During the qualifying match for the 2006 FIFA World Cup, Torres scored 7 goals in 11 appearances and became the top scorer of his country during the qualification. The year 2008 is one of his successful years as Spain became the European champions. A couple of years later, Spain went on to become the World Champion by winning the FIFA World Cup held in South Africa.

During the 2008 UEFA Euro final, Torres became the Man of the Match for his mind-blowing performance in the match. And the following year, he won the FIFA Confederation Cup Silver Shoe.

In the year 2012, he was a recipient of the UEFA Euro Golden Boot. After a year, he was honored with the FIFA Confederations Cup Golden Shoe.

Fernando Torres' Net Worth And Salary

From a very early age, Fernando Torres was considered a football prodigy and eventually, he came out as one of the finest footballers. Not only name and fame, the footballer also made a large amount of fortune from his career. According to Celebrity net worth, Torres has an estimated net worth of around $90 million.

As per the same source, Torres' estimated annual salary is $20 million. In addition to his salary, Torres has earned $9 million annually from his endorsement deal with a variety of big brands companies such as Pepsi and Adidas. As of June 2014, according to Forbes, he has made $3.5 million from his endorsement and $3 million in 2013.

During his career with Chelsea, he was paid $281,500 a week. He joined the club in January 2011 in an $80 million transfer from Liverpool. Torres signed a contract with Chelsea for an undisclosed fee reported to be £50 million which also made him the most expensive Spanish player in history.

He also featured in the comedy movie Torrente 3: El protector which had a budget of £5 million and grossed over £18 million at the box office worldwide.

He is the proud owner of a number of luxurious cars some of them are listed below.

Fernando Torres is married to his wife Olalla Domínguez Liste since 2009. The couple exchanged vows in a private ceremony with just two witnesses at the local town hall in El Escorial, Madrid.

It is reported Torres and his wife Liste started dating in 2001. They met in the Galician seaside town of Estorde, Cee, where Torres visited with his family each year. The couple welcomed their first child, a daughter named Nora Torres on 8 July 2009 at the Hospital La Rosaleda, in Santiago de Compostela, Galicia.

They also have a son, Leo Torres, born on 6 December 2010 at Liverpool Women's Hospital. Besides, he is a big fan of the former British writer, poet, and philologist John Ronald Reuel Tolkien.

Here is 10 must know things about Torres.