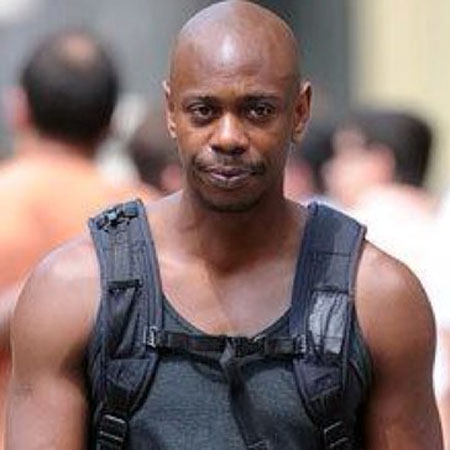 American comedian Dave Chappelle gained a lot of fame after his Comedy Central program, 'Chappelle's Show,' became a smash hit in the early 2000s. A show ended abruptly because of his early retirement. A raunchiest and the most versatile actor-comedians has also played a number of iconic roles in several successful movies like Half Baked, You've Got Mail and Blue Streak.

Form his illustrious career, a comedian has earned a decent amount of net worth.

Dave Chappelle was born on the 24th of August, 1973 in Washington D.C., United States. His mother, Yvonne Chappelle, was a professor at the University of Maryland, Howard University, and Prince George’s Community College. She was also a Unitarian Universalist minister.

Dave’s father, William Dave Chappelle III, worked as a statistician before becoming a professor at Anti och College. His parents raised him up with great compassion and care in Silver Spring, Maryland.  Dave stayed in Washington with his mother after his parents separated. He has also a Felicia Chappelle Jones and Williams S. Chappelle.

Initially, Chappelle attended Woodlin Elementary School. Chappelle’s career took off at the early age of 14 while he was in high school at Duke Ellington School of Arts in Washington DC. He graduated with theater arts in the year 1991.

Dave Chappelle moved to New York to start his career as a comedian. He was not able to be successful as a comedian at once. He was booed off the stage during his performance at Harlem’s famed Apollo Theater. He was nicknamed “The Kid” by Whoopi Goldberg.

Dave Chappelle parodied in the 1997 short film “Bowl of Pork”. He portrayed another supporting role in the 1994 film “Getting In”. He successfully became the opening act for R&B soul singer Aretha Franklin. Dave made a guest appearance on an episode of “Home Improvement”. Impressed by his work, ABC decided to give Dave Chappelle a role in “Buddies”.  The show was canceled after disappointing ratings.

Dave Chappelle decided to leave the entertainment industry after his father’s death. But, he soon appeared as a nightclub comedian in the 1996 comedy “The Nutty Professor”. He got a chance to work with Eddie Murphy, who was one of Dave’s comedic influences. He portrayed a minor role in 1997’s Con Air.

Besides this, Dave Chappelle co-wrote the 1998 cult stoner film “Half Baked”. The film still remains a classic so-called “stoner” film. Dave portrayed the role of Tom Hanks' character's friend and confidant in You’ve Got Mail.

Dave Chappelle debuted his own weekly comedy show called Chappelle’s show in 2003. He returned to full-time touring stand-up, serving as a headliner in August 2013. Moreover, he made his first major New York City appearance in June 2014. He appeared in the film Chi-Raq in 2015.

In 2018, for his first two specials The Age of Spin & Deep in the Heart of Texas, Chappelle won a Grammy Award under the category Best Comedy Album. The comedian made his come back to the big screen playing the major role in 2018's box office hit movie A Star Is Born.

In Feb 2019, the comedian won  Best Comedy Album at the 61st GRAMMY Awards.

Dave Chappelle is one of the successful comedians as well as television/film producer and actor. From his successful career, a comedian has also earned a tremendous amount of money. According to Celebrity net worth, he has an estimated net worth of $50 million, as of 2019.

In 1999, Chappelle was a cast in the movie Blue Streak which was a box office hit grossing over $117 million worldwide at the box office on a budget of $36 million. In the movie, he made an appearance alongside Martin Lawrence, Luke Wilson, Peter Greene, Nicole Parker, and William Forsythe.

Here is his luxurious  car collection,

Dave Chappelle is a married man. He tied the knots with his girlfriend Elaina Mendoza Erfein on 5 Dec 2001.  A comedian first met his wife when he was in Brooklyn. The couple dated for a few years before exchanging their vows.

The two have also two sons, Sulayman Chappelle and Ibrahim Chappelle and a daughter, Sonal Chappelle. In 1998, he converted to Islam before his marriage. Dave Chappelle's spouse Elaine is a Philippino.

They are one among the few drama-free and private Hollywood couples. And it's been over one and a half decade that the couple is still together and living a blissful married life with their three children in Ohio.

Chappelle also engaged in several charitable projects. He gave his quality time to Seeds of Peace International Camp which located in Otisfield, Maine and brings together young leaders from communities in conflict.