Dashaun Wesley is an American dancer, actor, and model who grabbed attention for his appearance on the fourth season of MTV’s American's Best Dance Crew with the Vogue Evolution team. He was a host for the HBO Max reality show Legendary. Moreover, he is also known for his performance in the musical drama film Magic Mike XXL and FX series Pose.

When And Where Was Dashaun Wesley Born?

Dashaun Wesley was born on August 24, 1984, in Brownsville, New York, the United States. As per nationality, he is American who belongs to the Afro-American ethnicity. He is 36 years old as of 2021.

When he was 19 years old, his mother pa s sed away battling HIV/AIDS. He often supports HIV/AIDS awareness and has worked as an HIV tester, counselor, and youth support facilitator.

Dashaun Wesley is widely known for his unique vogue dance style. He and his crew Vogue Evolution took part in the fourth season of MTV’s American's Best Dance Crew in 2009.

The same year, he appeared in the TV show It's On with Alexa Chung. He featured in the doc u mentary miniseries I Love the 2000s and TV movie The Wiz Live! in 2015. 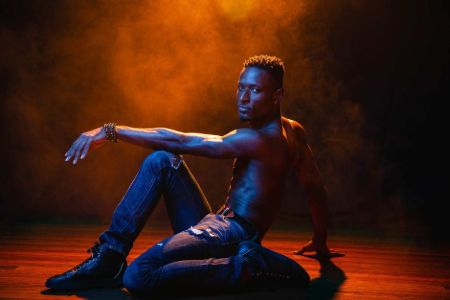 He also performed as a voguer in the musical drama film Magic Mike XXL that same year. He made his appearance in the television series Hit the Floor in 2018.

Besides his voguing and acting, he also has modeled for Metro dot Pop Magazine, Clik Magazine, B66 underwear, ZuluRose, and more.

Vogue dancer Dashaun Wesley has appeared in the musical drama film Magic Mike XXL, which collected $117 million at the box office against the budget of $14 million.

His net worth is not yet officially revealed. However, he is believed to have an estimated net worth of $500 thousand as of March 2021.

Dashaun Wesley Relationship Status: Does He Have A Wife?

As of now, there is no information relevant to his personal life. He hasn't talked much about his dating and relationship status.

Therefore, it makes us hard to track down his private details. Nonetheless, he is very focused on his prolific career rather than a love relationship.

Dashaun Wesley is active on numerous social media platforms. He has over 100k followers on his Instagram @dashaunwesley, whereas his self-titled Twitter has like 14k followers as of now.

Similarly, his Facebook page has more than 28k followers, and his TikTok has surpa s sed 35k followers already.