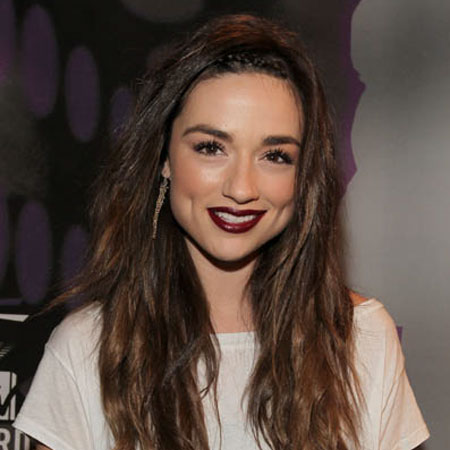 Reed is an American actress and a model. A native of Michigan, Reed is best known for her role Allison Argent in the MTV series Teen Wolf. The actress has deserved credit for her work in numerous movies and TV shows Gotham, Skyline, Crus, and more.

Who Is Crystal Reed?

Crystal Reed was born on 6 February 1985 in Detroit, Michigan, United States of America. She grew up in a conservative Catholic family. She has an older brother named Corey Reed.

Though her family was Catholic, Reed briefly attended the Baptist Church. She is an American by nationality and belongs to White-American ethnicity.

Crystal Reed completed her education in Roseville attending Dort Elementary School, Roseville Junior High, and Roseville High School. She went on to enroll at the Wayne State University and earned her degree in Bachelor of Fine Arts.

As a kid, she loved dancing and started studying dance at an early age and was a dance captain during her high school. Crystal Reed had performed the dance in the musicals in her local community.

It is not long ago that Crystal Reed stepped out to pursue her career from Roseville to Hollywood. After graduation, Crystal moved to Chicago working in a number of local productions.

Crystal Reed finally got her on-screen debut in 2010 as a guest star in CSI: Crime Scene Investigation, CSI: NY, Rizzoli & Isles and The Hard Times of RJ Berger.

Crystal Reed got her breakthrough role in 2011 as Allison Argent for the MTV series Teen Wolf till 2014 until the character died. However, she made her return in the series on its season five in 2016 in the different characters, Marie-JeanneValet.

The actress has landed a number of breakout roles in movies. In 2011, she appeared in a movie Crazy, Stupid, Love alongside Emma Stone, Steve Carell, Ryan Gosling, and Julianne Moore. Furthermore, Reed also featured in another hit movie Skyline sharing the screen along with Donald Faison and Eric Balfour.

She Is Once A Divorced Woman

The 5ft 7 inches tall Crystal Reed marrie her previous husband Peter John Nottoli, in 2008. The couple, however, did not last long and their relationship ended in divorce after four-year of their marriage. They did not any child.

Who Is Her Current Boyfriend?

Crystal Reed is open about her love life. She was in a brief relationship with  Darren McMullen, a Scottish TV and radio presenter, and actor by profession. Crystal and Darren had been dating since 2014. Sadly, their relationship also did not last long and they broke up after six years of a love affair.

Prior to being with Darren, Crystal has dated with a British actor, Daniel Sharman. They were in a relationship for more than a couple of years. They, however, broke up in 2013.

Crystal confessed that she was left alone by her boyfriend after going together to a prom dance making her feel awful. She then started to realize that she can control her feelings not of others, leading her to be joyous in relationships.

The quick inclination on her net worth is believed to be her return in the Teen Wolf, starring in different roles and other sponsorships and endorsements.