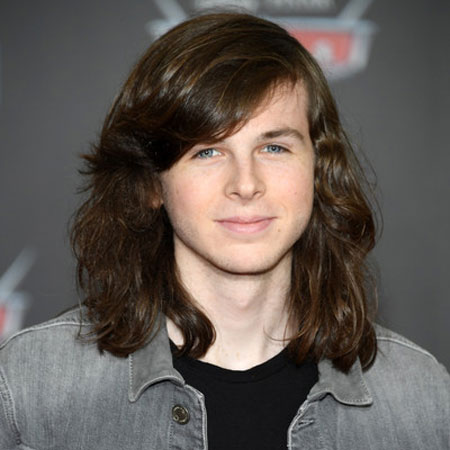 Riggs made his Hollywood debut in 2006 from Jesus H. Zombie and later worked in Get Low, The Wronged Man, and Mercy among others.

Chandler Riggs was born on 27th June 1999 in Atlanta, Georgina under the birth sign Cancer. Riggs is American as per nationality and is of White ethnicity. He is the first child of Gina Ann and William Riggs. He has a younger brother Grayson Riggs.

Riggs attended Etowah High School. At the age of nine, he made his musical theater debut in Atlanta’s Fox Theater production of The Wizard of Oz.

Chandler Riggs made his big screen debut in 2006 from the movie, Jesus H. Zombie. In 2009, Riggs worked in the drama film, Get Low with Robert Duvall, Bill Murray, Sissy Spacek and Lucas Black. Some of his other work includes The Wronged Man, Terminus, and Mercy.

Riggs made his TV debut in 2010 from the post-apocalyptic horror TV series, The Walking Dead.

At age of 10, Riggs appeared as Carl Grimes, his biggest role till date in the TV series, The Walking Dead. He shared the screen in the TV series with Norman Reedus, Andrew Lincoln, Lauren Cihan and Steven Yeun.

For his role in the TV series, he has been nominated for various awards and won some of them including

His acting was highly appreciated by both fans and critics. After his performance in the series, his fan following reached to peak.

As per Celebrity Net Worth, Chandler Riggs has an estimated net worth of $2 million. Riggs earns the salary of $300k per episode from the TV series, The Walking Dead.

In December 2017, he collaborated with Lolaby and co-wrote the song Hold On which was released under the named Eclipse. The same month, he bought a house. After the success of his first song, he released another song titled Lunar which can be found on iTunes, Spotify, and Soundcloud.

He has a YouTube channel from where he is making a good amount of money.

Chandler Riggs, the star of The Walking Dead, is currently single. Previously, Riggs was in a relationship with Brianna Maphis in 2015. His then-girlfriend is an Instagram star. Maphis was a fan of Riggs before they started dating. Their relationship, however, did not last long and ended in 2017. After the break-up, the couple deleted all their pictures from the social media.

In the past, Riggs was also linked to Hana Hayes and Lizzie Sanderson.

He is very interactive with his fans and has a good fan following. As of 2018, he has over 3.4 million followers on Instagram and has over 1.67m followers on Twitter.

Here are 7 facts about Chandler Riggs: