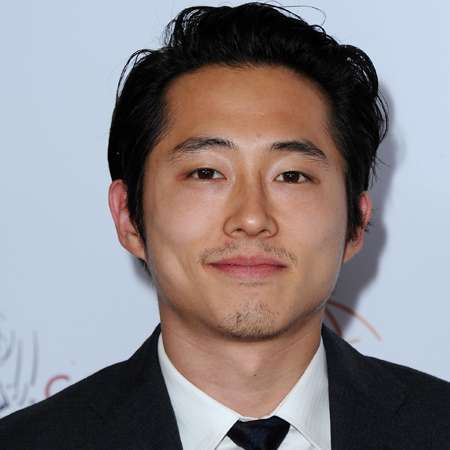 A Korean-American actor and voice actor, Steven Yeun came to limelight and gained a lot of fame following his finest performance in the highly rated AMC's horror drama TV series The Walking Dead. He has also made an appearance in numerous short and feature movies, including Mayhem, Okja, as well as Sorry to Bother You.

The Walking Dead actor has been married photographer Joana Pak since 2016 and the two are blessed with one child too.

Yeun's parents had a two beauty supply stores in Detroit, Wayne. His star sign is Sagittarius. He belongs to Asian ethnicity and his nationality is Korean- American. Steven has a brother Brian Yeun.

This famous actor earned his bachelor's degree from Kalamazoo College in 2005 with a major subject psychology with a concentration in neuroscience. He also met Jordan Klepper during his time at Kalamazoo.

Yeun developed an interest in acting from his days at Kalamazoo. He also gave audition for college's improv group, Monkapult, but was rejected. In 2005 he moved to Chicago with his brother and he got involved in Stir Friday Night, a sketch comedy group. Later he joined The Second City in Chicago.

Yeun has featured in a number of TV series like The Big Bang Theory, Warehouse 13, The Legend of Korra, Drunk History, Comedy Bang! Bang!, American Dad!. He is currently busy in his future American animated crime film Chew.

From 2010-16, Yuen played the role in the hit series The Walking Dead alongside Andrew Lincoln, Jon Bernthal, Sarah Wayne Callies, and Laurie Holden.

Steven Yeun's Net Worth And Salary

Steven Yeun has earned a tremendous amount of net worth from his career which as per Celebrity net worth is around $4 million, as of 2018. Korean-American actor Yuen made his big break following his breakout role in the highly rated TV series The Walking Dead. In the series, she appeared from 2010-16 and received around $90K from the series.

Yeun took his Los Angeles mansion on a market for around $2.48 million. The four-bedroom home has also vaulted ceilings as well as wide-plank hardwood floors. In the year 2018, he was a cast in the movie Sorry to Bother You which became the instant hit at the box office grossing over $16 million on a $3.2 movie.

Steven Yeun is a married man who tied the knots with his girlfriend, photographer Joana Pak on December 3, 2016. The couple dated for a few years before they exchanged the vows. He and his wife becae the parents for the first time after they welcomed their first child, a son named Jude Malcolm Yeun, on March 17, 2017.

His hobbies include sports and music. This handsome actor has a height of 5 feet 9 inch. He has black colored hair and dark colored brown eyes. Besides, the actor is also a longtime Detroit Pistons fan.

Steven Yeun has earned a tremendous amount of net worth from his career which as per Celebrity net worth is around $4 million, as of 2018. Korean-American actor Yuen made his big break following his breakout role in the highly rated TV series The Walking Dead. In the series, she appeared from 2010-16 and received around $90K from the series.  her age