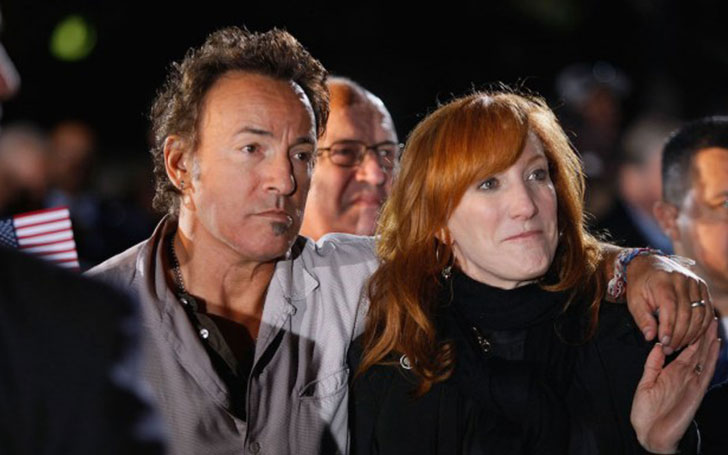 Married for 26 years but still, the rock legend Bruce Springsteen and his wife Patti Scialfa share the same love and affections like they did 26 years back. Springsteen and Scialfa have set the bars high for all those couples who believe in love and ultimately wants to be together all their lives.

Like every couple, Springsteen who is nicknamed as The Boss and his co-band member wife, Scialfa experienced several twists and turns in their life. They were even highly criticised while they started dating since the rock star was still married to his first wife, Julianne Phillips, then.

Despite all the controversies, the couple is currently celebrating 26 years of blissful married life along with three children. Recently, the lovebirds made their public appearance in party capital Ibiza and impressed all the fans with their strong bonding. We have all details about the couple's and their married life here.

The rock legend Bruce Springsteen and his wife of 26 years Patti Scialfa are still madly in love with each other and the lovebirds don't hesitate to express their affection towards each other. According to Daily Mail, recently Springsteen and Scialfa were spotted enjoying a vacation in party capital Ibiza.

Sixty-seven years old 20 times Grammy winner rock star and his wife who is sixty-four were caught arm-in-arm on the beach. Springsteen appeared tanned flashing his chest below the open buttons of a pastel blue shirt and what looked like comfortable beige trousers with bare feet, whereas his wife appeared stylish in a black wrap around dress, a hat and a pair of sunnies.

The couple was then joined by fashion designer, Calvin Klein who appeared in a black t-shirt and white shorts and fellow rock legend, Noel Gallagher who wore white shirt and sunglasses.

Scialfa is Springsteen's second wife. Prior to marrying Scialfa he was married to Julianne Phillips. Bruce was introduced to Julianne by Barry Bell. They tied the knot in May 1985, however, Julianne filed for divorce against Springsteen on August 30, 1988,  and it was finalized on March 1, 1989. Bruce Springsteen and Patti Scialfa first met in the early 1980s at a local bar in New Jersey where Scialfa performed along with one of Springsteen's friends, Bobby Bandiera. They quickly became friends during the time and later in 1994, Scialfa joined Springsteen's band for their USA tour.

Love started blooming between Springsteen and Scialfa during the Tunnel of Love Express Tour in 1988 while Springsteen was still married to Phillips and their divorce was in process. They soon started living together for which they were highly criticised. Despite all the criticism and the hate, they together welcomed their first child,  Evan James, Springsteen on July 25, 1990. After 11 months of having a child together, the couple decided to take their relationship to the next level and got married on June 8, 1991, in Beverly Hills estate in Los Angeles. According to the PEOPLE, the couple exchanged vows in a candlelight wedding ceremony in front of close friends and relatives which included John Fogerty, Bonnie Raitt, Michael O’Keefe, Jackson Browne and Daryl Hannah among other celebrities.

The couple welcomed their second child, Jessica Rae Springsteen on December 30, 1991, and their third child, Samuel Ryan Springsteen on January 5, 1994.