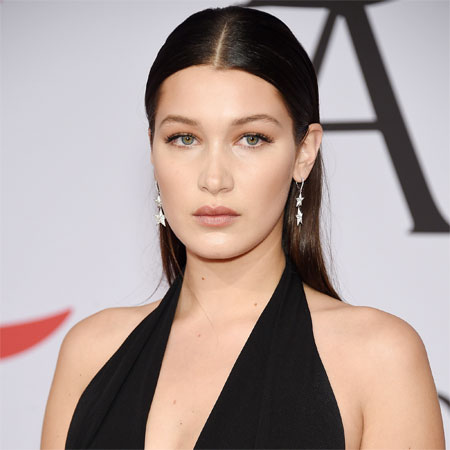 Bella Hadid is a 21-year-old American model, best known as the brand ambassador of Dior Beauty. She is also a runway model for Victoria's Secret. She is also a nationally ranked equestrian; she was voted "Model of the Year" in 2016.

Bella Hadid was born Isabella Khair Hadid on October 9, 1996, in Los Angeles, California. She is the daughter of a real-estate developer, Mohamed Hadid and former model, Yolanda Hadid.

She is American by nationality and as far as her ethnicity is concerned Bella is half Dutch, from her mother's side, and half Palestinian from her father's side.

Hadid grew up along with her siblings, elder sister, Gigi Hadid who is also a popular model, and a brother, Anwar in a ranch in Santa Barbara, California. Besides, she has two older half-sisters, Marielle and Alana.

During her early days, she dreamed of attending the 2016 Olympics but had to give up in 2013 because of her chronic Lyme disease. She did not announce of her disease until October 2015.

In 2012, Hadid was diagnosed, along with her mother and brother, with the chronic illness.

Bella Hadid moved to New York city in 2014 to study photography at Parsons School of Design. She left her school to pursue her career in modeling, as she was signed by IMG.

Bella Hadid began her modeling career at the tender age of 16 with a Flynn Skye commercial project. She also starred in the "Swan Sittings" alongside Ben Barnes.

Hadid's professional modeling journey started in 2014 after she signed to IMG Models. The same year, she made her debut at the New York Fashion Week and got an opportunity to work with many renowned fashion designers and brands including, Tom Ford, Tommy Hilfiger, Jeremy Scott, Ralph Lauren, Victoria's Secret, and Chanel.

Hadid made her first cover appearance in December edition of Jalouse Magazine in 2014 and also featured on Day 27 of Love Magazine's Love Advent.

Later, she made it to the cover of prestigious magazines like Vogue Australia, Elle, Seventeen, V Magazine, Harper's Bazaar, GQ, W magazine, Glamour magazine and many more.

Besides modeling, she has appeared in several short films and music videos which helped her to gain more public attention.

Bella Hadid is possibly single at present, she had a short but dramatic relationship with the Canadian singer, The Weeknd. The duo started dating in 2015, and they first spotted together in April 2015 at Coachella. In 2016 Grammy's, the duo made their red carpet appearance as a couple.

However, Hadid and The Weeknd split in November 2016. The reason behind their break up was reported to be their busy schedules.

Shortly after the breakup, Abel Makkonen Tesfaye ( better known as The Weeknd) started dating pop sensation and actress Selena Gomez. The two have now officially broken up, Gomez has gone back to dating her ex-boyfriend Justin Bieber.

Since breaking up with Selena Gomez, The Weeknd and Bella Hadid have been seen enjoying a dinner date together. However, they haven't officially come out as a couple.

In 2016, Hadid donated her pair of denim jeans to Johny Dar's Jeans for Refugees project to raise money for the International Rescue Committee. She also attended the "No Ban, No Wall" march in New York City in 2017.

Hadid proudly called herself Muslim and joined London protests against Trump's decision to move the U.S. Embassy to Israel and recognize Jerusalem as the capital of Israel.

Hadid was arrested and charged with 'Driving under the influence' (DUI) due to which her driving license was suspended for a year and was given six months of probation.

Bella Hadid is one of the most successful models at present  She is associated with many popular brands, Nike, Dior Cosmetics, Tag Heuer, and Bulgari accessories and fragrance, she earns a great deal of money from being the face of these brands.

Hadid is fond of sneakers, she bought sneakers worth $1000 in October 2017 and in an interview with Harpersbazaar she explained,

"When I moved to New York, I signed with Nike, and I only wore Nike, and I have 200 pairs of sneakers in my closet from that brand alone."

Hadid spent her childhood in Beverly Hills palace which was built by his dad, Mohamed Hadid. The value of the mansion is at a whopping $85 million. The palace is made of 35,000 sq ft area with six bedrooms, home theater, and many other features. Later, she moved with her mother and stepdad to a Malibu mansion which costs $19 million.

In 2015, Bella Hadid was honored with "Model.com's Industry Awards" for Break Out Star: Women for Reader's Choice Category.

In 2016, she was nominated for six awards out of which she succeeds to win the three  including "Second Annual Fashion Los Angeles Awards," "GQ Men of the Year Awards" and "Models.com Industry Award" for Model of The Year.