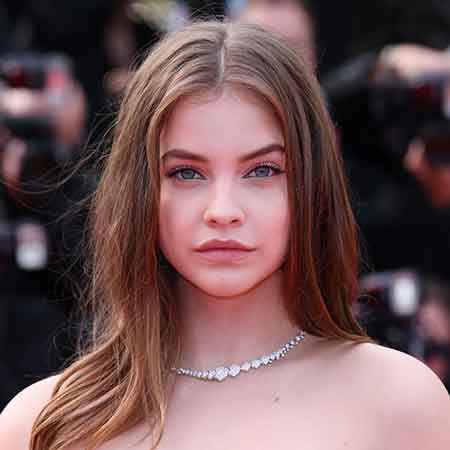 For many aspiring models becoming Victoria's Secret Model is their ultimate goal. Slipping on a pair of Angel wings is a dream come true for them but not all of them get that chance. Luckily the Hungarian fashion model, Barbara Palvin got a chance to be an angel.

Along with Victoria's Secret, she modeled for Vogue and was the face of the Rouge Caresse lipstick range and Miss Candy cosmetic collection.

Became an ambassador of L'Oréal Paris

Similarly, she was named Sports Illustrated Swimsuit Issue Rookie of the Year 2016. The same year, she ranked #4 on Maxim's Hot 100 of 2016 list.

Barbara Palvin was born on October 8, 1993, in Budapest, Hungary under the birth sign Libra. She has a sister, Anita Palvin. During her childhood days, she enjoyed playing soccer and singing.

She was spotted in 2006 at the age of 13 while walking down a street with her mother in Budapest. Highly influenced by popular English model Kate Moss, especially her chic heroin look, Palvin agreed to take up modeling.

Palvin studied at the Ferenc Erkel School and later entered the gymnasium in Budapest.

Barbara Palvin began modeling after a talent scout approached her on the street in Budapest when she was 13. The same year, she booked her first major job, a spread in Spur Magazine, and has appeared in multiple high-profile publications since then.

She featured in popular fashion magazines including French L’Officiel, Russian L’Officiel, and Jalouse swiftly, and was part of the campaigns for Victoria’s Secret, Armani Exchange, H&M, and Pull & Bear

Chosen as a Victoria’s Secret Angel

In February 2012, Palvin became an ambassador for L’Oréal Paris. The same year, she was chosen as a Victoria’s Secret Angel at the age of 19. She walked the runway for a wide range of designers around the world, including Vivienne Westwood, Emanuel Ungaro, Nina Ricci, Miu Miu, Louis Vuitton, and Prada.

Palvin is of the spokesmodels of L’Oreal Paris at the 2013 Golden Globes Awards. She also advertised on the Victoria’s Secret Swim 2013 Catalogue.

Besides modeling, she is also an actor. She made her acting debut in the 2014 American 3D action fantasy adventure film, Hercules as mythological queen Antimache.

Barbara Palvin has appeared in various magazines and advertisements and has ama s sed a decent amount of money from her career. As per the sources, she has an estimated net worth of $6 million.  She earned money from photo shoots, contracts, as well as brand endorsements.

As of 2018, Palvin is one of the top models in Europe. She is the face of the cosmetic range L’Oreal Paris. She mainly endorses its Rouge Caresse lipstick range and Miss Candy cosmetic collection.

Barbara Palvin has not officially announced anyone as her boyfriend but if we believe the sources, she is dating American actor and model Dylan Sprouse.

It all started when Sprouse posted a picture on his Instagram account hanging out with the model in Russia during the World Cup, with the caption Sports written next to the football and trophy emojis.

After that, the rumored couple made their public appearance on 2018, July 24, attending a screening of the movie Puzzle at the Roxy Cinema in New York City. Moreover, if we scroll their Instagram Palvin and Sprouse share several photos of theirs. But the duo is yet to confirm their relationship.

Below, we present the interview of Barbara Palvin