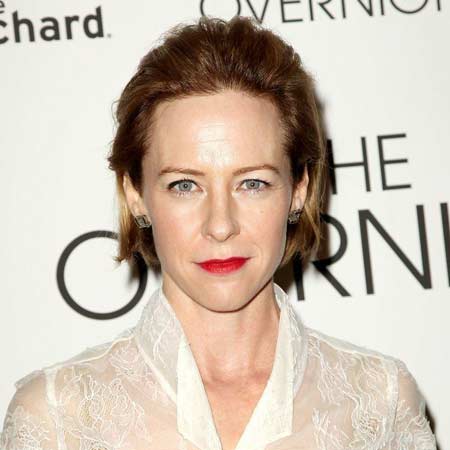 Amy Hargreaves is a talented American movie, TV and theater actress. Hargreaves is popular for her roles in the TV series, Homeland as Maggie Mathison and 13 Reasons Why as Lainie Jensen. She made her Hollywood debut in 1992 from the TV series, Lifestories: Families in Crisis and two years later, she made her movie debut from Braincase. Hargreaves married Renaud Selmes at Eglise St, Andre Church in Grenoble, France. The couple shares two children together.

Amy Hargreaves was born to Margaret and Robert Hargreaves on 27th January 1970 in Rockville Center, New York. Her birth sign is Aquarius. Hargreaves is American by nationality and belongs to White ethnicity/race. She has a brother, Mick Hargreaves.

Hargreaves earned Bachelor’s degree from Fairfield University and later graduated with a Master’s degree in political science from the New York University. After completing her academics she worked in several theater plays.

Amy Hargreaves made her Hollywood debut in 1992 from the HBO’s TV series, Lifestories: Families in Crisis. Hargreaves than worked in several TV series, ABC Afterschool Special, Matt Waters, Saint Maybe and Family Law among others.

In 2002, Hargreaves appeared as Karyn Milner in Law & Order: Criminal Intent with Vincent D’Onofrio, Kathryn Erbe, Leslie Hendrix and Eric Bogosian. In 2011, she appeared in the recurring role in spy thriller TV series, Homeland. She played in the series alongside  Claire Danes, Mandy Patinkin, Rupert Friend, and Damian Lewis since 2011 appearing in 19 episodes.

As of 2018, Hargreaves is working in the Netflix’s mystery teen drama TV series, 13 Reasons Why with Katherine Langford, Dylan Minnette, Alisha Boe and Christian Navarro. She is working in the series since 2017 as Lainie Jensen.

Hargreaves made her movie debut in 1994 from Braincase. The movie starred Edward Furlong, Frank Langella, and T. Ryder Smith. In 1998, she starred with Ornella Muti, Bai Ling, and Peter Stormare in the movie, Somewhere in the City.

Some of her movies include Delirious, Michael Clayton, Shame, Blue Ruin and Wonderstruck among others.

Amy Hargreaves has an estimated net worth of $1 million, however, the amount is still under review. Hargreaves worked in several movies that made a good collection at the box office. Some of her movies are:

As per some sources, Hargreaves earns a salary of $45k from her role in the TV series, 13 Reasons Why produced by Selena Gomez.

Amy Hargreaves is a married woman. On 7th August 1999, Hargreaves tied the knot with Renaud Selmes at Eglise St, Andre Church in Grenoble, France. Their reception was held in Selmes’ maternal grandparents home. Following the marriage, the couple started living in Manhattan.

The couple shares two children together, a son, Luc Selmes and a daughter whose name is not disclosed by them. The family rarely give public appearances.

Hargreaves is an animal lover and a supporter of animal rescue and animal adoption organization.

Here is the video where Amy Hargreaves talks about the TV series, 13 Reasons Why: