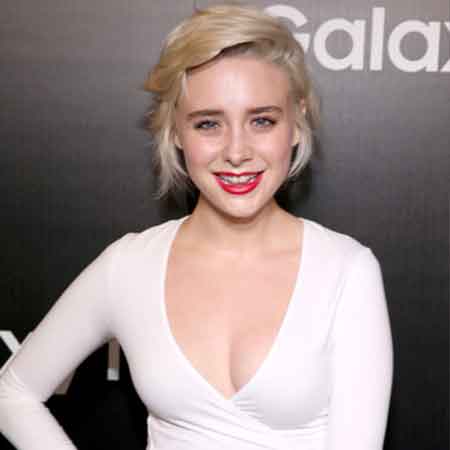 Alessandra Torresani is an American actress who debuted in the entertainment industry at the age of nine when she hosted a San Francisco television program called Kids' WB Club. She is best known for playing the role of Zoe Graystone in the critically-acclaimed science fiction TV series Caprica. Furthermore, her other notable movies and television series include Mat (2004), Car Dogs (2016), Going to the Mat (2004), Two and a Half Men (2014), The Fosters (2015) and many more.

Alessandra Torresani was born Alessandra Olivia Toreson on 29 May 1987 in Palo Alto, California to James Sylvester Toreson and Marcia Glow. Her father ran startup tech companies and her mother was a CEO.

From the age of 2, she was interested in dancing and singing and used to perform in her school.

And we wonder how I became so extra...I get it from my Mama!

She earned a black belt in Taekwondo at the age of 9.

Alessandra Torresani at the age of 8, did a job of doing interviews between cartoons on The WB Television Network. She gained her big break as a host when she got an opportunity to host the Kids WB Club for San Francisco's KBWB (Channel 20) and appeared as a child star in a number of TV series in the late 90s  and early 2000s.

In 1997, Torresani starred on an episode of the Nickelodeon sketch comedy series KaBlam. Then in 1998, she appeared in the medical drama series ER and in the NBC sitcom Working in 1999.

In the year 2000, she made her appearance in two movies named Mad Song as Alex and Baby Bedlam as Becky. Similarly, she also became the part of the two popular television series in the same year; Popular by The Warner Bros TV Network and Even Stevens on Disney Channel.

Similarly, Torresani's other popular shows include Going to the Mat, JAG, Arrested Development, Grounded for Life, Love Inc., The War at Home and Terminator: The Sarah Connor Chronicles.

The year 2009 was a big year in Torresani’s career, she was cast as a regular on the sci-fi drama series Caprica. Though the series run for only one season, it was more than enough for Torresani to show her talent and gain a huge number of fans.

Later in 2011, she appeared as a guest judge on the reality competition series RuPaul’s Drag Race and also made a guest appearance on series Warehouse 13 and American Horror Story. From 2016 to 2017, she starred in the role of a scriptwriter, Claire on season 9 and 10 of The Big Bang Theory alongside Kaley Cuoco, Johnny Galecki, Jim Parsons, Simon Helberg, and Kunal Nayyar.

Torresani has been a part of the industry for a long time now. She started at the age of nine and has been a part of several popular movies and television shows working with many Hollywood A-listers. There is no doubt that she has earned an impressive income from her career and her net worth is in six-figures. However, the actual number is yet to be revealed

Talking about Torresani's personal life, she prefers to keep her dating life low profile. She, however, has given a hint to the romantic side of her life. She seems to be very close with a musician Sturgis Adams. The pair is very active on social media and often shares pictures of them together.

Torresani first uploaded a boomerang video with Adams on Instagram in 2015 and later in 2016 she again shared a picture with him. Though there is much news of their probable relationship, the couple is yet to confirm being a girlfriend and boyfriend.

Besides. she was romantically linked to the television personality Rob Kardashian. The rumors swirled when they were spotted together at Coachella on 6th April 2011.

Torresani is a huge fan of American millionaire radio host Howard Stern. She an insomniac, she’s always on the move and hardly sleeps.

Check out her videos talking about The Black Diamond Affair by Azature,