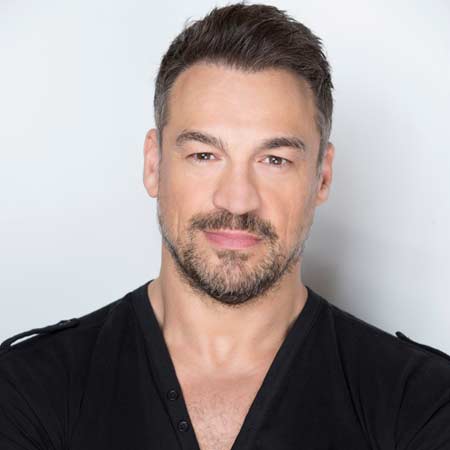 The former boxing champion, Aleks Paunovic started his acting career in 1994 from the TV film, Heads. Paunovic is best known for playing the character Gustus in sci-fi drama TV series, The 100. He is also popular for his recurring role as Julien Dupont in The CW’s TV series, iZombie. Paunovic is in a long-term relationship with actress, Aliyah O’Brien.

Aleks Paunovic was born to Croatian descent mother and Serbian descent father on 29th June 1969 in Winnipeg, Canada. Paunovic is Cancer which defines his personality to be deeply intuitive and sentimental.

Happy Mother’s Day to the one that makes me laugh like a freak! #love #heart #mothersday

Paunovic started boxing at a young age. He used to be a champion boxer until a shoulder injury at the 1999 Pan American Games. Before starting his career in acting, he was in a rock band.

Aleks Paunovic started his acting career in 1994 as Roderick from the black comedy TV film, Heads directed by Paul Shapiro. Back to back, Paunovic worked in a number of TV series including, Jeremiah, John Deo, Mutant X, Cold Squad, Maneater, Bionic Woman, InSecurity, and Zapped among others.

Paunovic, however, is popular for his roles in

Paunovic debuted in the movie, Wishmaster: The Prophecy Fulfilled as Brick in 2002. The same year, he appeared in spy comedy film, I Spy with Eddie Murphy, Owen Wilson, and Famke Janssen.

His other works are Personal Effects, Transparency, Vendetta, Blcakway, Numb and War for the Planet of the Apes. As of 2018, he is working in movies like Puppet Killer, Violation, Siberia, Hard Power and Giganthropithicus which are all in the post-production phase.

Aleks Paunovic has an estimated net worth of $1 million, but, the amount is still under review. Paunovic worked in several hit movies that made an impressive box office collection.

Besides, Paunovic is involved in several charity works. He is a supporter of baby2bay organization which helps to provide essential stuff to the low-income family to take care of their children.

The former boxer, Aleks Paunovic is in a long-term relationship with talented Canadian actress Aliyah O’Brien. In an interview, Paunovic told something about O’Brien,

‘’ She’s probably one of the most grounding people I’ve ever been around. She’s showing me what being happy is about. I get in my head. I get into wanting more, which automatically gets you comparing yourself with other people. No matter where you are in your career, there’s always someone else who’s at a higher level than where you aspire to be at, so you beat yourself up because you’re not there — or you’re just happy with the journey. She really shows me the journey, which is great.’’

The couple posts several pictures on their social media. They seem to share a healthy relationship without any break-up rumors.

As a child Paunovic was bullied. As of 2018, he is supporting the Red Cross/ Impact Anti-Bullying Campaign to stop bullying.

Here is the video where Aleks Paunovic talks about his works: