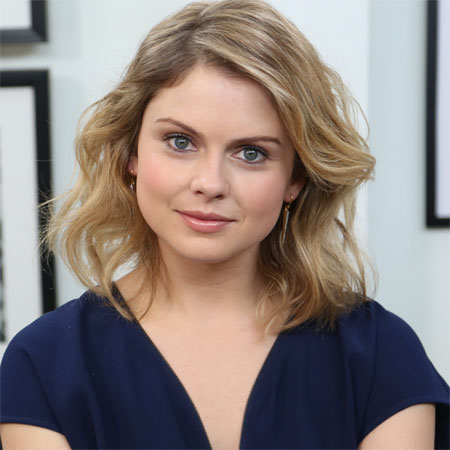 New Zealand actress, Rose Mclver is best known for appearing in a number of TV-series and movies such as, ‘Masters of Sex,’ ‘Power Rangers: RPM,’ ‘Once Upon a Time,’ Blinder,’ and ‘Predicament.’ In 2002, Mclver won the TV Guide NZ Television Award under Best Juvenile Actress. She has also received the Visa Entertainment Screen Award for the Best NZ Actress. Currently, she stars as Olivia "Liv" Moore in CW's ‘iZombie.’

The beautiful actress is dating Benjamin Hoeksema, her boyfriend since 2005. Till date, the couple shares a strong bond with no signs of a breakup.

Rose Mclver was born Frances Rose Mclver on 10th October 1988 in Auckland, New Zealand. She belongs to White ethnicity/race and by nationality, she is New Zealander.

Mclver grew up in Titirangi, New Zealand, as the daughter of artist Annie Coney Mclver and photographer John George Whitfield Mclver. Her brother, Paul Mclver, was an actor before he pursued a career in music.

Mclver graduated from the Avondale College in 2006. She then joined the University of Auckland, majoring in Psychology and Linguistics, but she did not complete her degree.  Mclver also learned ballet and jazz dance until she was thirteen.

In 1995, Mclver was cast in the TV series ‘Riding High’ as Billy. The following year, she acted in New Zealand soap opera, ‘City Life Sophie.’ She then got featured in New Zealand film, ‘Topless Women Talk About Their Lives’ as Sally.

In 2009, Rose Mclver made her big screen debut with the supernatural drama film, The Lovely Bones as Lindsey Salmon alongside Mark Wahlberg, Rachel Weisz, Susan Sarandon, and Stanley Tucci.

Then Mclver appeared in several movies, such as Predicament, The Dinner Party, Warning Labels, Queen of Carthage as well as in television series, Tangiwai, CSI: Crime Scene Investigation and Masters of Sex among others.

As per some online sources, Rose Mclver has an estimated net worth of $4 million, but the total amount is still under review.  Some of her movies that made an impressive collection at the box office are-

Rose Mclver is not married yet, but she is in a long-term relationship with an architect, Benjamin Hoeksema. They are dating since 2005 and still going strong as a couple.

Mclver started living with her boyfriend in Los Angeles in 2011.

Before establishing herself as a successful actress, Mclver worked as part-time importing bananas with Fair Trade. Mclver loves writing, crossword puzzles, and Sudoku.

Below, we present the video of Rose Mclver;