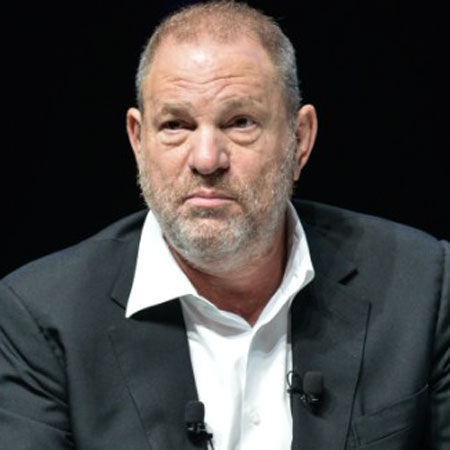 Harvey Weinstein is an American film producer and film studio executive. He is best known as the co-founder of Miramax. He has founded his company named The Weinstein Company. Film mogul Weinstein has produced numerous acclaimed features as Pulp Fiction, Good Will Hunting, and Shakespeare in Love.

The producer was terminated from The Weinstein Company by its Board of Directors following the series of allegations made against him.

Harvey Weinstein was born on 19th March 1952 in Flushing, New York, the U.S. He belongs to the White-American ethnicity/race & holds an American nationality.

Weinstein was raised in a Jewish family in a housing co-op, in New York City along with his younger brother, Bob Weinstein, is an American film producer who is a founder & head of Dimension film. He is the son of Max Weinstein and Miriam Weinstein. His father is a diamond cutter.

Weinstein graduated from the John Bowne High School. Later, he went on to study at the University at Buffalo.

Both Weinstein brothers had built up their pa s sion for movies and nurtured a desire to enter the film industry. The brothers founded a small independent film distribution company named Miramax in the late 1970s, using profits from their concert promotion business. The company's first release was music-oriented concerts such as Paul McCartney's Rockshow.

Miramax obtained the rights to two British films of benefit shows filmed for the human rights organization Amnesty International in the early 80s. The company started growing its library of films and directors.

In 1993, Disney offered the Weinsteins $80 million for ownership of Miramax after the success of the 1992 British-Irish-Japenese thriller movie, The Crying Game. The company followed with their first blockbuster, Quentin Tarantino's Pulp Fiction. The company won its first Academy Award for Best Picture in 1997.

Weinstein brothers left the company on March 29, 2005. They formed their production company named The Weinstein Company on September 30, 2005. The company started with several other media executives and directors including Quentin Tarantino, Robert Rodriguez, and Colin Vaines.

Harvey Weinstein's Net Worth And Earning

Harvey Weinstein has collected a considerable amount of money from his successful producing career. He has produced a number of hit movies. His net worth according to Celebrity net worth is around $50 million and $150 million according to The Richest.

The blockbuster movie, Pulp Fiction, which was also produced by Weinstein's production company made a total gross of $213.9 million worldwide. On 2 October 2017, he sold his Minute Man Hill property for $1.65 million. As per the property records, he bought the mansion in 1995 for  $825,000.

Weinstein also owned two other oceanfront mansions in Connecticut worth $7 million to $8.5 million apiece. Another home owned by Weinstein and his now ex-wife Chapman, that located in Amagansett in the Hamptons was relisted on the market for $12.4 million, in August 2017.

Harvey Weinstein is married twice. He first married his a s sistant, Eve Chilton and has three children, Remy Weinstein, Emma Weinstein, and Ruth Weinstein. They tied the knots in 1987 and divorced in 2004.

After that, Weinstein began dating English fashion designer & actress, Georgina Chapman. The duo married on December 15, 2007. The two welcomed their first child, a daughter, India Pearl Weinstein in 2010. They have also a son, Dashiell Weinstein, was born in 2013.

Even, a filmmaker Michael Moore also took legal action against the Weinstein brother, claiming Weinstein was owed millions in gains for his 2004 doc u mentary Fahrenheit 9/11.

The actress Asia Argento has taken the stage at the Cannes Film Festival on Saturday to talk about her alleged rape at the hands of the denounced producer in May 2018.

Weinstein is also active on issues including, poverty, juvenile diabetes, AIDS, & multiple sclerosis research. He also serves on the Board of Robin Hood Foundation, New York City-based non-profit that targets poverty, & co-chaired one of its annual benefits.