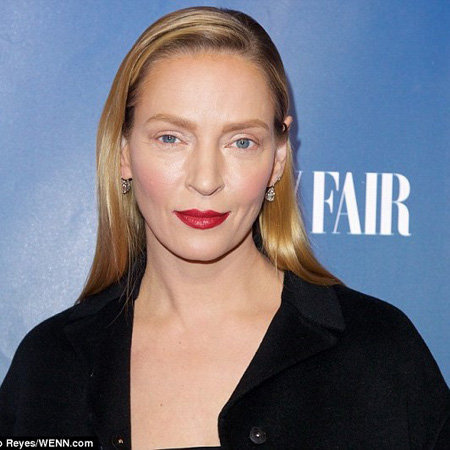 Uma Karuna Thurman, an American actress, and model was born on April 29, 1970, in Boston Massachusetts. She is notable for her role as Mia Wallace in the famous black comedy ‘Pulp Fiction’ in 1994. Along with this, she has also appeared in many other films throughout the 90’s, like The Truth about Cats and Dogs, Batman and Robin, Gattaca and Les Miserables.

Uma Thurman was born to Robert Thurman, a professor of Indo-Tibetan Buddhist studies and Nena Schlebrugge, a fashion model. Her father has English, Scottish, and Irish ancestry and her mother has Swedish, German and Danish ancestry. As a child, Thurman was brought up in Buddhist upbringing and even has a Sanskrit name. While attending Amherst Regional Middle School, she discovered her love for acting in the eighth grade. She then joined Northfield Mount Hermon School but dropped out to pursue a career in acting.

Uma Thurman started her career as a fashion model at the age of 15. She was featured in the Glamour magazines and the covers for the British Vogue magazines. She debuted in acting in 1987 when she appeared in the movie ‘Kiss Daddy Goodbye’. The next year, she appeared in three other movies, one of them being the Oscar-winning drama Dangerous Liaisons.

In 1990, Uma Thurman was featured in the sexually provocative drama ‘Henry and June’, the first film ever to get an NC-17 rating. During the time, the newspapers refused to advertise the film due to the rating, but she still got some good recognition. In 1993, she played the role of Maid Marlan in ‘Robin Hood’ and Glory in ‘Mad Dog and Glory’.

1994 was a big year for Uma Thurman, as she played Mia Wallace, one of the main characters in Quentin Tarantino’s ‘Pulp Fiction’, which is easily considered to be one of the best crime movies of all time. In the movie, she plays the wife of a mafia boss Marsellus Wallace. Her character in the movie is considered one of the most iconic female film roles in the 1990s. The next year, she appeared in ‘A Month by the Lake’.

In 1996, Uma Thurman appeared in two movies: ‘Beautiful Girls’ and ‘The Truth about Cats & Dogs’, both of which were moderately successful at the time. In 1997, she was featured in ‘Batman and Robin’ and ‘Gattaca’. The latter was a disappointment in the box office but was met with fairly positive reviews in the home market. The next year, she was seen in ‘The Avengers’ and ‘Les Miserables’. Her performance was considered poor, however, in the Avengers, a critical flop.

In the upcoming years, Uma Thurman took a hiatus from playing in major films. She only appeared mostly in independent low budget films like Vatel and Tape. In 2003, her career was relaunched when she reunited with Quentin Tarantino and appeared in Kill Bill: Volume 1 as well as Kill Bill: Volume 2. After that, she played in a number of movies including Be Cool, My Super Ex-Girlfriend, Motherhood, Percy Jackson and the Olympians, Smash and Burnt etc.

Uma Thurman's successful acting career has earned her a net worth of $45 million. In 2005, she was also commanding a salary of %12.5 million per film.

While on set of State of Grace, Uma Thurman met Gary Oldman and married him in 1990. On May 1, 1998, she accepted Ethan Hawke as her husband. She had two children with him, Maya Ray and Levon, before splitting up in 2003. Their divorce was finalized in August 2005. In 2007, Thurman began dating French financier Arpad Busson. Although they had a daughter together, Rosalind Thurman-Busson, they split up in 2014.

There have also been rumors stating that Uma Thurman and director Quentin Tarantino have had a romantic relationship, but both of them have denied it. They were, however, seen together at the Pulp Fiction 20th anniversary tribute at the 2014 Cannes Film Festival.