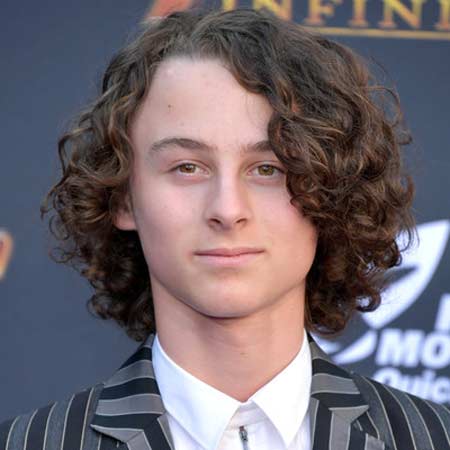 Wyatt Oleff is one of the prominent young actors in the entertainment industry. The actor gained international success after portraying the role, young Peter Quill in 2014's highest grossing superhero movie Guardians of the Galaxy. He earned further fame and reached the pinnacle of his career following his performance in the 2017's box office hit movies Guardians of the Vol.2 and It. In addition to films, Oleff also appeared in numerous hit TV series including Shake it Up! and Scorpion.

Wyatt Oleff was born Wyatt Jess Oleff, in Chicago, Illinois, United States, on 13 July 2003. He is the son of Jennifer Oleff and Doug Oleff. His mother is an artist who is mostly known for her colorful abstract and surreal paintings.

Oleff spent his early childhood in his hometown Chicago and later moved to Los Angeles along with his parents. He also has an older brother Eli Oleff and two younger sisters.

Wyatt Oleff entered in the entertainment industry with a commercial for Coldwell Banker. And he played his first professional role in 2012 TV series Animal Practice. He additionally featured in Shake it Up!, Once Upon a Time and Scorpion. The actor made his film debut appearing in 2014 romantic film Someone Marry Barry.

The rising actor reached a new height of his career after his outstanding performance in two another 2017 box office hit movies Guardians of the Galaxy Vol. 2 and It, both of them grossed $863.8 million and $700.4 million worldwide respectively.

From his meteoric career, Waytt Oleff has not only gained a lot of fame but also a considerable amount of money at such a young age. As per some online sources, the actor's net worth is believed to be more than $0.5 million.

Oleff became the part of several box office hit movies and some of them are listed below.

Wyatt Oleff is currently studying and is more focused on his career. He loves to hang out with friends and visits new places.

Oleff is also popular on social media especially on Instagram where he has more than 1 million+  followers.