Who Is Aaron Rodgers Dating After Breaking Up With Former Girlfriend Olivia Munn? Meet His New Girlfriend

The NFL superstar Aaron Rodgers managed to make his professional career to the top yet his personal life has been demanding for the player as he broke up with his longtime girlfriend Olivia Munn.

However, after the separation, the Green Bay Packers star is reportedly dating someone, who is he dating? Who is her new girlfriend?

Aaron Rodgers Is Dating Someone? Meet His Girlfriend

The NFL star Aaron Rodgers is enjoying his incredibly embellishing football career. Along with his successful career, the player is also living pretty decorative personal life. 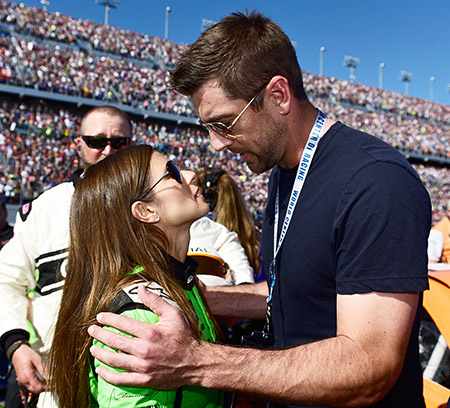 The rumors of their relationship started swirling up when both of them were spotted at various places spending quality time.

Concerning the hearsay, the most successful female driver Patrick addressed the rumor saying how they started dating.

We met at the ESPYs in 2012. We both remember meeting each other, it was quick,” Patrick said, before laughing. “I got his email address, and I remember thinking to myself, ‘Oh, not a phone number? Just an email address?

Throughout the years, the duo was in touch but in between, they lost contact for few years. However, in the end, it was meant to be and they hit it off.

The lovebird officially confirmed their relationship back in February 2018, ending the months-long speculation of their dating. Though it's been only a few months, the couple shares a strong bond as they know one another for years now.

Most recently the duo was seen attending the wedding of Green Bay Packers player Davante Adams and Devanne Villarreal on June 24, 2018.

The footballer Rodgers famously dated the beautiful American actress Olivia Munn. The pair started dating back in 2014, apparently, the two made a gorgeous couple. 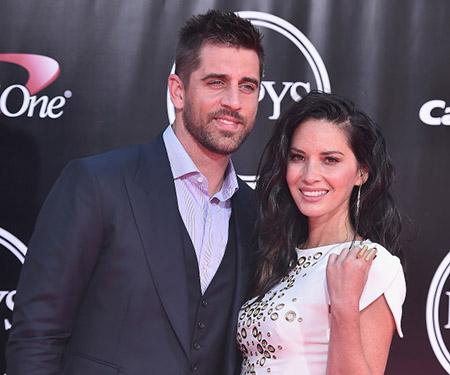 Once, Munn was rumored to be the reason for Rodgers' family issue but she opposed the news. According to her, it was the other way around, the actress said she rather tried to fix her boyfriend's broken family relationship as Rodgers was not talking to his parents for almost eight months prior to their dating.

At the end of their day there’s a lot of complications. I don’t think either side of the road is clean. But I do think it’s not OK when you try to stand on someone’s shoulders and then throw dirt in their face, which is what I think they did with him.

Looking at Munn's effort, she was an amazing girlfriend to Rodgers. She cared for him and supported him during difficult times. There were even reports of the duo's engagement when The Newsroom actress was spotted wearing a diamond ring on her left ring finger.

Unfortunately, things turned the opposite way as instead of getting married the couple broke up in 2017 shocking all the fans. According to some media reports, Rodgers' family and Munn were not on good terms which eventually led the pair to part their ways. The duo dated for three years before ending the relationship.

In April 2017, he was linked to Baywatch star Kelly Rohrbach when he was seen spending a lot of time together with her. Similarly, in 2011 he was in a relationship with Destiny Newton, the former duo was also rumored to be engaged. The news, however, turned out to be a hoax and the duo broke up in 2013.