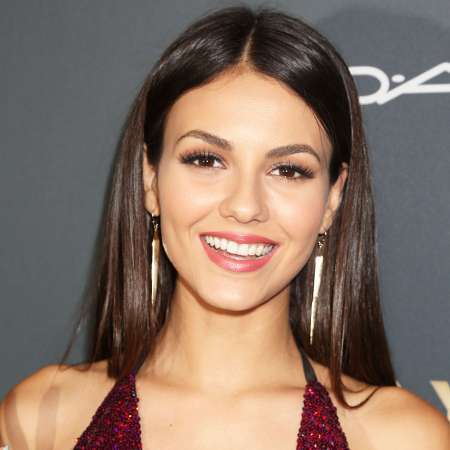 Victoria Justice has built a distinguished career in the field of acting and signing. The actress rose to prominence for her roles in TV series like the Zoey 101, Victorious, True Jackson, VP, The Troop, The Penguins of Madagascar, iCarly movies like The Boy Who Cried Werewolf. Besides, Justice is also most followed Instagram star who has over 15 million followers as of Dec 2018.

From her various professions, a woman of many parts has also collected a large amount of net worth.

As of 2018, Justice is dating actor and musician, Reeve Carney.

Born on February 19, 1993, in Hollywood Florida, United States Victoria Justice was brought up there with her sibling, a sister Madison. Her father Zack Justice is of English, German and Irish descent and her mother Serene Reed is of a Puerto Rican origin is what might have made her uniquely beautiful.

When Justice was ten, the family moved to Hollywood, California after she auditioned and was accepted into a musical theatre program at Los Angeles' Millikan Performing Arts Academy. She also appeared in commercials for brands like Ralph Lauren, Gap, Guess, Mervyn's, Peanut Butter Toast Crunch and Ovaltine which started her exposure to the television and thus the start of her career.

At the tender age of 10, Victoria Justice made her acting debut as a guest in the Gilmore Girls episode "The Hobbit, the Sofa and Digger Stiles" where she played the character Jill No. 2 in a walk-on role. Her family then moved to Los Angeles to pursue her interest in acting which subsequently landed her a role of Rebecca, a young pageant contestant, in an episode of the Disney series, The Suite Life of Zack and Cody. Justice then bagged the role of Stella, a young girl who sees visions of Mary Magdalene, in the 2005 drama thriller Mary. The film debuted and was shown in the Venice Film Festival, Toronto Film Festival, Deauville Film Festival and the San Sebastian International Film Festival, on 2005 which increased her demand on screen.

Victoria’s breakthrough role was awarded to her the same year, whereby she got the role of Lola Martinez, a young aspiring actress, in the Nickelodeon series Zoey 101 in its second season. The second season with her character debuted on September 11, 2005. She also landed two roles in movies in the same year. Justice portrayed the role of Rose in the Hallmark television film Silver Bells and a cameo appearance in the R-rated film When Do We Eat.

Justice also made a guest appearance on an episode of the series Everwood in the episode “Enjoy the Ride” and made her theatrical film debut the very same year with her cameo role in the movie Unknown. The film was a failure financially but she got to play the supporting role of Holly in the 2006 thriller The Garden. 2007 and 2008 were spent on filming the third and fourth seasons of Zoey 101 along with a release of a single in 2007 which was a cover of the Vanessa Carlton song A Thousand Miles. After the series Zoey 101 came to an end she appeared in an episode of the Nickelodeon series The Naked Brothers Band.

Justice appeared then in 2009 in the Nickelodeon musical Spectacular alongside Nolan Funk and Simon Curtis whereby her character performs three songs. The film was a huge success with over 3.7 million viewers on its premiere night and critically positive reviews from critics. She appeared on The Naked Brothers Band again on an episode named “The Premiere”. Justice also guests starred in episodes of iCarly, True Jackson, VP, The Troop and the game show BrainSurge on 2009.

Justice’s own musical show, based on her, named Victorious was another of her huge hits in Nickelodeon. The show was produced by Dan Schneider and debuted on March 27, 2010, with 5.7 million views. On 2010, she recorded the series first featured song, Make It Shine which is also the theme song of the show. Other songs like You’re the Reason, Beggin on Your Knees, Best Friend’s Brother and Freak the Freak Out have been featured in the series.

Justice also made her appearance as a guest in an episode of the animated series The Penguins of Madagascar as a voice over of Stacy. The 2010 Nickelodeon television movie The Boy Who Cried Werewolf starred her as Jordan Sands, a girl who transforms into a werewolf and was a huge hit with 5.8 million viewers in the premiere and fairly positive reviews. On 2011, the cast of iCarly along with the cast of Victorious starred in an episode iParty with Victorious. Victorious came to an end on February 2, 2013.

Justice then played the character of Wren in the comedy movie Fun Size alongside Johnny Knoxville, Chelsea Handler and Josh Pence which was released on October 26, 2012. She has also released her songs like Countdown and Take a Hint on iTunes. Her dirty dance song Shut Up N Dance has also been uploaded to YouTube.

On June 18, 2012, her debut single Gold was released. It was announced on October 11, 2013, that Justice was cast as Lindy Sampson in the cyber-thriller Eye Candy, by MTV, based on the novel by R.L Stine. Her songs Gold, Shake, Caught Up in You and Girl Up have been uploaded in her YouTube channel. Her debut album is to be released sometime in 2014.

Having acted since a very small age, Victoria has established herself as a teenage sensation all around the world and is doing her best in the roles she portrays in various movies.

In the year 2018, Justice appeared in Bugger and Summer NIght. Some of her TV projects in 2018 are Queen America and American Housewife.

Victoria Justice is one of the quickly established actresses and singers. She has landed a number of a breakthrough performance in both movies and TV series. Justice has an estimated net worth of around $10 million, as per Celebrity net worth, in 2018. The actress played a significant role in on the Nickelodeon television series, Zoey 101, along with Jamie Lynn Spears, Paul Butcher, Kristin Herrera, Christopher Ma s sey, Alexa Nikolas, and Erin Sanders.

Like other celebrities, the actress has many endorsement deals, like ElleWIM Outfit. She makes a lot of money from her singing career as well. Victoria has a personal luxury car, pink T-Bird and an apartment in Hollywood, California. She is fond of beauty brands like Channel and Nars; wears dresses of Rebecca Minkoff Lola, Diane Von Furstenberg, Hervé Léger, and Aldo McConkie among others.

Justice is likewise one of the most followed Instagram stars who has tremendous Instagram followers with over 15 million. And the Instagram star who has over 1 million followers can command over $15 K per sponsored post, therefore, Justice has also collected a considerable sum of money from her account too.

Victoria Justice is not married yet but has had a long dating history. She first started dating even at the age of 11 with one of the Sprouse twins, Cole Sprouse. It was reported that the two were in a relationship until 2005, and as of now, Sprouse is in a serious relationship with his Riverdale co-star, Lili Reinhart.

Justice later dated “The Hunger Games” artist Josh Hutcherson from 2008 to 2009. She then went on to involve in a relationship with her ex-boyfriend Nicholas Hoult in 2009 and broke up with him the same year. Victoria and Ryan Rottman dated from 2011 to 2013 after which she began dating 2014 movie Naomi and Ely’s No Kiss List co-star Pierson Forde.

The two were also seen cozying up with each other at the Staples Center’s Hyde Lounge for Beyoncé’s Mrs. Carter Show World Tour.  Despite their loving relationship, the power couple parted ways in November 2015.

By Dec 2016, the actress is dating actor and musician, Reeve Carney. They met for the first time on the set of Rocky Horror Picture Show. They are still together and judging by their social media the two seems much in love.

14 million?! This is insane! Thank you guys so much!! Instagram Live comin’ atcha this week. Sammy & I are so happy. All my love!

As of Dec 2018, Justice has over 15 million followers, on her Instagram account. She has also a pet dog.

Victoria Justice isn’t just a pretty face and a successful actress and singer but also a philanthropist as well. She is also a part of a number of organizations such as the United Nations Foundation which benefits issues like AIDS, Children, Environment, Health, Human Rights and Peace. She also became a member of the Charity Campaign Girl Up on September 30, 2010, and also became a part of the Music Makes it Better Campaign launched by the Children’s National Medical Center alongside Justin Bieber and The Band Perry.

Some of her Favorite Things Are Listed Below