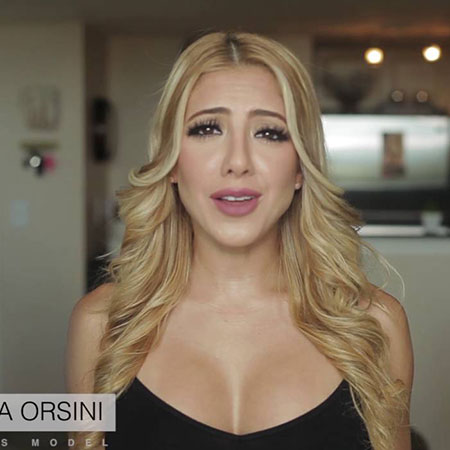 Born and raised in Atlanta, Valeria Orsini is an American swimsuit and lingerie glamour model. She is also a fitness mogul and helped thousands of people get into shape with her workout videos and tips. She is famous on social media like Instagram and as of 2019, she has about 4.2 million followers.

Valeria Orsini was born on January 19, 1990, in Atlanta, Georgia, the United States under the zodiac sign of Capricorn. People who fall under this zodiac sign have the personality of responsible, discipline, and self-control person. Orsini holds an American nationality ad belongs to mixed ethnicity of Colombian, Puerto Rican and Italian.

Her mother is Colombian and her father is Puerto Rican and Italian. When she was at the age of 2, she relocated to Miami, Florida with her family. She was born into a multiracial family, so she can speak English and Spanish Fluently. She completed her education from Keiser University, where she studied Occupational Therapy.

Valeria developed her love for fitness from her childhood age. She first started boxing and progressed towards other forms of fitness activities as she grew older. While working out she eventually discovered weight training and trained hard until her body started changing. As per Valeria, she felt very different and more confident.

After that, she started to began uploading workout videos alongside dieting advice hoping that it would work for others as well. Soon after she started to gather more fans who achieved awesome results because of her advice. Soon she became an online 'Fitness Queen' among her followers.

Besides Fitness Adviser What Is She Famous For?

Valeria's journey into the modeling industry began when she was in the first year at the University when a photographer saw her potential of modeling. She began modeling as a swimsuit and lingerie model. While working as a model, she has worked with many mega brands.

Valeria Orsini is a hard working model and fitness mogul who has earned thousands of grant from her profession. As a model, she has worked with many mega brands. Besides modeling, she is a fitness mogul, and was also featured for a music video of 'White Girl'.

She owns a Highlander car, she brought it on February 23, 2018. She even made a partnership with Southdadetoyata after she brought a car from there.

Valeria Orsini is not in any kind of relationship at the moment but is searching for a right boyfriend. She wants a smart man who can teach her many new things. She even told that she wants someone who is fun and makes her laugh no matter what they are doing.

Valeria is also very busy building her career as a model and fitness mogul.

Me after eating my favorite food lol I love sushi. Instant gratification What Could You Eat Everyday?? . . Set| @lotuscouture

In the video shown below, Valeria Orsini shows how she maintains her body along with her daily fitness exercise.

You May Also Like : Sommer Ray, Ana Cheri, Jen Selter, and Izabel Goulart