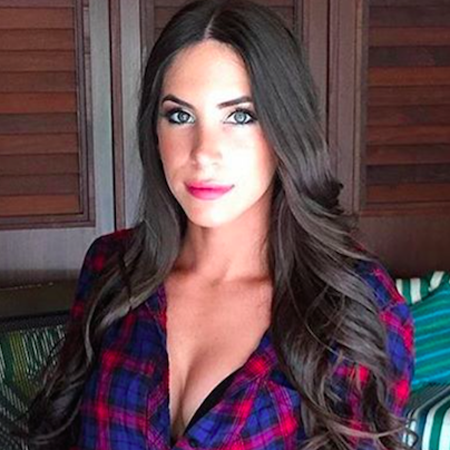 Jen Selter is a white American internet celebrity, best known for her attractive butt workouts. She is also a social media personality, fitness model, and fitness adviser. Jen has featured on the cover of various famous magazines and has even portrayed in some television shows.

Jen Selter was born on August 8, 1993, to her mother, Jill Selter and father, Todd Selter, in New York City, New York, the United States of America. She has an older sister named Stephaine. Jen Selter also has a stepbrother Jacob from her stepfather, Rob.

Jen was an ordinary girl when attending her high school. She was interested in physical fitness and sports from the very beginning.  At the age of 15, she was publicized in a magazine due to controversial Rhinoplasty because she had nose surgery. She then did not attend her higher studies.

During her working day, Jen simply posted a photo of her butt wearing a bikini while she was in fitness gym in a social media which was pictured from a side and the photo went insanely viral.

With over millions and millions of followers on all of her social media, the pretty girl is zoomed on to make a small fortune through endorsements and public appearance, book and in fitness videos projects as well.

Jen has also appeared in television shows as a fitness trainer in which she gave fitness lessons from which she started receiving huge endorsement deals.

The first major endorsement deal Jen received was with Circus Fitness in fitness equipment manufacturer. She has also received sponsorship and spokeswomen offers from reputed companies such as Nike, Lululemon, and New Balance. Her Fans believe that she can be next Jillian Michaels. Selter was voted 82 in the top 99 Most Desirable Women 2014.

Now Jen has a huge number of followers on her personal Instagram. Selter also signed with The Legacy Agency, which represents baseball stars Carl Crawford and Johan Santana.

Being a social media star, Jen Selter has maintained her personal life very secret. Jen seems to be single, insiders say that she is not interested in any love affairs and dating boyfriends. Rather she is focused on her career and fitness programs.

However, Jen has a huge number of fans especially males, who want to date her, but Jen is still single and unmarried. Information regarding Jen's personal life is not available in detail.

In 2014, there was also a rumor that Jen was dating Dan Bilzerian who is also an Instagram star and a poker player. The rumor came to light when she was pictured partying with him in Las Vegas.

However, some source revealed that it was a meeting of Instagram celebrities. Bilzerian even revealed that he is not the type of person who wants to be in a committed relationship.

Jen Selter's Net Worth and Salary

Jen Selter, also known as The Queen of Booty earns her salary from her career as Fitness model as well as from the endorsement of various brands. Her net worth is estimated to be about $500 thousand in 2017.

Besides this Jen is making a living off her lady lumps and making money on Instagram posts. She also gets paid off for appearances and other travel much easy for her to maintain a luxurious life.