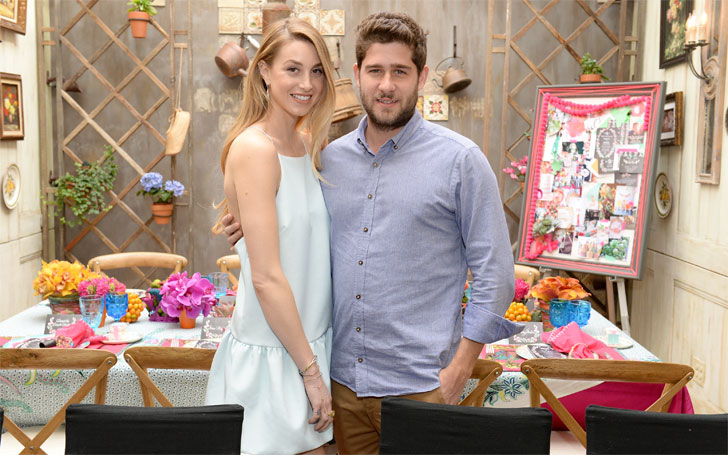 \Whitney Port is an American television personality, author, and fashion designer best known for appearing in the reality television series The Hills. The show highlighted about the personal and professional lives of Port along with her friends Lauren Conard, Heidi Montag, and Audrina Patridge.

Whitney Port was later signed to portray in her own spin-off series The City which reported the lives of Port and her friends Jay Lyon, Olivia Palermo, and Adam Senn. She has launched her own fashion line “Whitney Eve” in 2009 and has served as the judge Britain & Ireland’s Next Top Model.

Whitney Port married Tim Rosenman on November 7, 2015, in Springs, California. The couple got married nearly one month after her former Teen Vogue colleague Lauren Conrad got engaged with William Tell.

Port was in a custom-fit wedding dress designed by Ashi Couture and the rings were prepared by Tacori. The couple expressed their happiness and told:

"It's such a great feeling! We finally get to stop saying fiancé and be husband and wife! We really always knew we would end up together and now we can start a new amazing chapter in our lives. The wedding was everything we hoped it would be and will cherish the memories for the rest of our lives."

The 32 years old former The Hills star first met her future husband while playing in the MTV reality series The City. Rosenman was the executive producer of the series and was a good friend of her during the show.

Port started dating Rosenman after she ended her relation with Ben Nemtin. They got engaged in November 2013 and married two years later.

The actress revealed that she was the one to make the first move in an interview. She said that she got his number and made up some excuse as he was not going to cross his limit.

However, she also revealed on her blog that Rosenman proposed her twice. He proposed her first time in their Australia trip dropping onto one knee. The next time he proposed her was with the 3-carat oval engagement ring.

They were spotted together after some days of marriage in Los Angeles.

Whitney Port revealed that she is expecting her first child with Tim Rosenman. The actress posted a photo on Instagram and revealed the news recently on 9th February.

"This is how I am going to explain where babies come from to the little baby that is now growing inside my belly because Timmy and I are PREGNANT!"

Port’s co-star, Audrina Patridge,  in the TV series The Hills has recently welcomed her child in 2016. Her friend Lauren Conrad is also planning for her first child with William Tell.