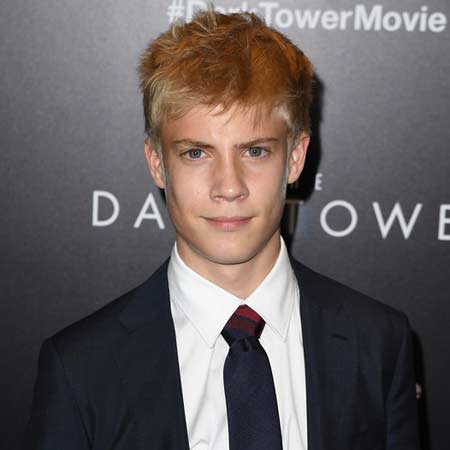 British actor, Tom Taylor is known for portraying the character Jake Chambers in 2017 American dark fantasy western film, The Dark Tower. He also appeared in Casualty (2014), The Last Kingdom (2015), and Taboo (2017) among others. Taylor has been starring in BBC’s drama television series, Doctor Foster as Tom Foster since 2015.

Tom Taylor was born on 16th July 2001 in Surrey, England under the birth sign Cancer. He belongs to Caucasian ethnicity and holds British nationality. He has a twin sister named Erika.

Taylor attended The Secret Stage School in Camberley, he had originally dropped out in 2013 but was urged to return by his former teacher Mrs. Rachel Bell so that he could meet with acting agents.

The following year, he portrayed the character Young Uhtred in an episode of British historical fiction television series, The Last Kingdom. He also starred in the 2nd season of American crime drama television series, Legends as Young Martin.

In 2017, Taylor debuted in the big screen from the American dark fantasy western film, The Dark Tower as Jake Chamber, alongside Idris Elba and Matthew McConaughey. The same year, he was cast in the 5th episode of BBC television drama series, Taboo.

Taylor is portraying the character Tom Foster in BBC’s drama television series, Doctor Foster since 2015. He shares the screen with Suranne Jones, Bertie Carvel, Robert Pugh, and Adam James among others.

Taylor’s upcoming project is an adventure film, The Kid Who Would Be King, where he will be playing the lead character of Lance. He shares the screen with Louis Serkis, Patrick Stewart, Rebecca Ferguson, and it will be released on March 1, 2019.

Tom Taylor is a rising star, who earned a good amount of money from his acting career. But the actual amount of his net worth is not revealed. As per some sources, it is speculated to be more than $1 million.

It is reported that the average salary of U.S child actor is in between $1,000 and $1,200 for a day's work, so it can be assumed that he also earns the same figure.

Moreover, Taylor’s movie The Dark Tower was made with the budget of $60 million and was able to accumulate a tremendous amount of $113.2 million at the box office. IMDb rated the movie  5.7 out of 10.

Below, we present the interview of Tom Taylor.