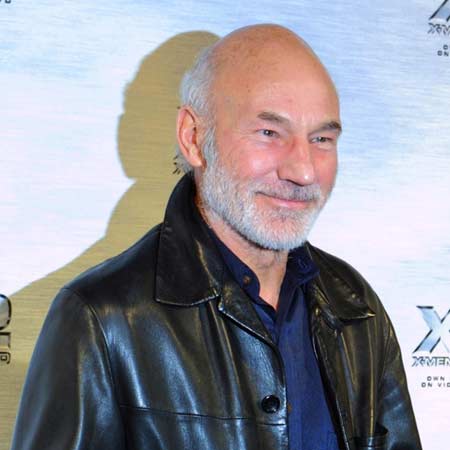 Patrick Stewart is a universally loved actor known as Professor X in the X-Men franchise and Captain Jean-Luc Picard in Star Trek. Stewart was a member of the Royal Shakespeare Company from 1966 to 1982 and appeared in theatre plays like Hamlet and A Midnight Summer Dream. He has been in the movie and Television industry since 1974 till present. In 2017, he was cast in movies like Dragonheart: Battle of the Heartfire, The Emoji Movie, and The Wilde Wedding. Stewart is cast in the upcoming 2019 fantasy adventure movie The Kid Who Would Be King set to release on May 1st.

Patrick Stewart was born in Mirfield, Yorkshire, England on July 13, 1940, to parents Gladys Nee Barrowclough and Alfred Stewart. His father was a sergeant major in the army while his mother was a weaver and textile worker.

He grew up in England with his two older brothers, Geoffrey and Trevor. For schooling, Stewart attended Crowlees Church of England Junior and Infants School. While in school his English teacher asked him to perform a Shakespeare drama which led to his love for acting. Later on, he enrolled in Mirfield Secondary Modern School to study drama where he met actor Brian Blessed at a Mytholmroyd drama course. Since then the two have remained friends. Stewart left school to take part in local theatre and did a side job as a newspaper reporter. He eventually left his job choosing acting over it.

Due to his passion for acting both Stewart and actor friend Brian received a permit to attend a drama school in Bristol named Bristol Old Vic Theatre School.

Stewart pursued his career as a theatre artist at first and became recognizable for his participation in various highly loved drama plays. He was a member of the Royal Shakespeare Company from 1966 till 1982 and worked as an associate artist appearing with famous actors like Ian Richardson and Ben Kingsley. He worked in plays like Hamlet and did a Broadway named A Midsummer Night's Dream. After gaining enough experience, Stewart debuted in the television industry appearing in 1974 BBC TV Mini-series called Fall of Eagles as Vladimir Lenin.

He then debuted in the movie industry in 1975 in Hennessy and Hedda and continued featuring in many more movies. He has voiced in many movies and TV series like Cosmos: A Spacetime Odyssey, The Simpsons, Futurama, American Dad, The Pagemaster, The Prince of Egypt, Jimmy Neutron: Boy Genius,  Steamboy and so on.

Stewart was even cast in a documentary The Captains starring opposite William Shatner. He continued to work on Broadway as he missed acting on stage and received much honor for his stage works. Stewart has appeared in almost 60 productions of the Royal Shakespeare Company.

Stewart always mentions that the highlight of his career is his involvement in Star Trek franchise. He appeared in the role of Captain Jean-Luc Picard in Star Trek: The Next generation in 1987 and remained in the series until 1994. Later on, he was seen in Star Trek movie franchise playing the same character up until 2002 which was the last star trek movie where he was cast.

While Stewart was doing the Star Trek series he didn't realize his fan following and was surprised to see thousands of people in an event of Star Trek convention. Stewart gave 9 long years of his life to Stark Trek and earned immense fame and success from it.

In the late 1990s, Stewart was cast in the high budgeted American superhero series  X-Men series where he appeared as Charles Xavier. He was convinced by director Bryan Singer to act in the franchise as he wanted to work with the director.

By now, Stewart has collectively been featured in seven films of X- Men franchise and even voiced many X-Men video games. He shared the screen with popular actors Hugh Jackman, Jennifer Lawrence, Michael Fassbender, Ellen Page, Peter Dinklage, James McAvoy, Halle Berry and so on. Stewart parted ways with the X-Men franchise with his appearance in Logan for the final time.

Stewart has won many awards for his roles in movies and TV series including his Broadway acts. He won Laurence Oliver Award for Best Actor in a supporting role and Drama Desk Award for outstanding solo performance for the movies Anthony & Cleopatra and A Christmas Carol.

Stewart's  TV play The Lion in Winter was nominated for Golden Globe Award for Best Actor in miniseries and Primetime Emmy Award for Outstanding Miniseries. His symphonic fairy tale Peter and the Wolf won Grammy Award for Best Spoken Word Album for Children.

Patrick Stewart is estimated to have a net worth of $70 million.

He has put his Yorkshire Dales house up for sale for  £535000 which was owned by him for 25 years. He purchased a penthouse duplex in 2012 which was worth $2.5 million. The penthouse has an open plan dining and a living room with a height of 31 feet. and has eleven-foot ceilings, hardwood floor, fireplace and a full bathroom with marble accents. The house has historic features including an inglenook fireplace with original cooking recesses, mullioned and chamfered windows and exposed beams. Stewart owns several cars and lives a luxurious life with his family.

Steward drove in many luxurious high branded cars in his lifetime. He used to ride in 1939 Ford 'Pop' and Ford Squire estate in the 1962 and 1966. Honda Prelude was his 1987'S choice while the following year he started riding in Mercedes 420 SEC coupe. Then he owned cars like Jaguar XJS, Lexus RX 450h, and Porsche Panamera 4 E- Hybrid. Stewart's dream car is MG TF 1500.

Stewart married Sheila Falconer in 1966 and gave birth to two children Daniel and Sophia. The couple divorced 24 years later in 1990.

After being single for 7 years Stewart in 1997 got engaged to Wendy Neuss, one of the producers of Star Trek and married three years later on August 25. Their marriage lasted only 3 years and later on went their separate ways.

Stewart started building a relationship with actress Lisa Dillon and they dated until 2007 and a year later began dating singer and songwriter Sunny Ozell. They first met when Stewart was performing a William Shakespeare's tragedy, Macbeth and got married in September 2013 after five years of relationship. He lost his hair when he was 19 due to alopecia, a medical condition also known as spot baldness.

Stewart had a hard time as a child since his father used to physically abuse his mother. He grew up in a household with domestic violence from his father which made him aware and led him to involve in activism. To eliminate this issue, he became a patron of a UK charity for abused women, Refuge. Stewart also supports the Combat Stress, a charity giving the therapeutic and clinical community and residential treatment to former British Armed Forces. He is also a patron in the United Nations and even delivered a speech at UNA-UK's Forum 2012 on July 14, 2012.

Stewart believes in fairness &  equality and is a socialist who is the member of the Labour Party. He has been the president of Huddersfield Town Academy a club which identifies and develops young talents.

In 2001, he was appointed as an Officer of the Order of the British Empire for his service to acting and cinema. Again in 2010, he was knighted by Queen Elizabeth II for his services to drama.

Here are the top 10 performances of Patrick Stewart.