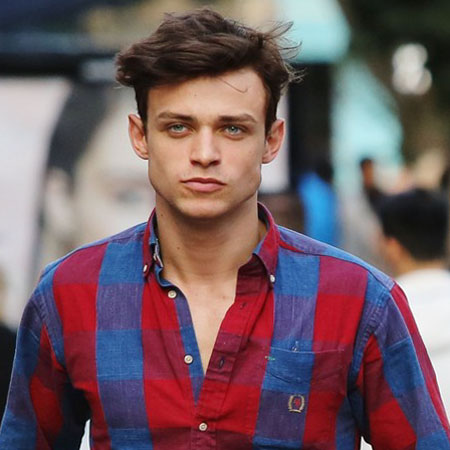 Thomas Doherty, a Young and aspiring British actor, age 21, is familiar with his role as Harry Hook, the son of Captain Hook on Descendants 2, and in the Disney television musical series, The Lodge. The actor has also worked in many other successful movies and TV series.

Born on April 21, 1995, in Edinburgh, Scotland, Thomas Doherty's parents are banking professionals. Thomas has a sister named Rachel Doherty, who is a dancer, and an older brother named Niall Doherty, who plays soccer.

Thomas has British and Scottish nationality and ethnicity-wise, he is a Caucasian. He enjoyed playing soccer as a kid with his brother.

Thomas Doherty was born and raised in Edinburgh. He Is a graduate of The MGA Academy of Performing Arts in 2015.

Thomas Doherty has recently initiated his career in acting. Prior to that, he worked as a waiter at an Edinburgh-based restaurant and was also a model. Moreover, he was also into soccer which he played until the age of 17.

Since acting was his preferred career along with soccer, he tried out his luck in acting. He started out as street boy#2 in an episode of the horror drama series Dracula in 2013.

Thomas Doherty is recognized as the cast of Descendants 2 as Harry Hook and in the Disney television musicals series, The Lodge. He made his first movie debut in a short film The First Time in 2016.

Doherty has worked with young celebrities like him including Sofia Carson, Cameron Boyce, China Anne McClain, Mitchell Hope, and many others.

Thomas Doherty's Net Worth And Earnings

Thomas Doherty has earned a good amount of money from her various works. His net worth as of 2019 is around $1 million, according to some sources. The actor has worked in a number of movies and TV series.

Thomas Doherty is not married. He is in a romantic relationship with Dove Cameron. His girlfriend Dove Cameron is an actress and singer. The couple met on the sets of Descendants 2.

Thomas calls his girlfriend Dove Cameron Chlo, a nickname given by him. Reportedly, he gifted Dove Cameron a customized bracelet with a heart-shaped pendant with her nickname Chlo. Dove Cameron confirmed their relationship in February 2017.

Thomas loves to work out and likes to keep his physique in good shape. He trains at Equinox fitness club based in LA or London as per his schedule. He also goes for yoga with his girlfriend Dove Cameron. The couple is still together and sharing a wonderful relationship.