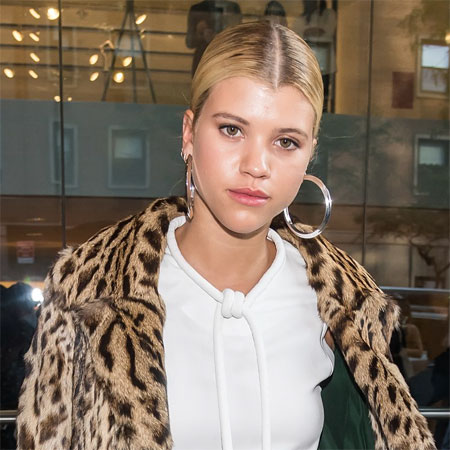 Sofia Richie is a fashion model who started modeling at an early age of 14. She is also popular as the youngest daughter of singer-songwriter Lionel Richie. She has worked for numerous high-profile brands, including Tommy Hilfiger, Michael Kors, and Chanel.

In 2017, Richie modeled for DL1961's Spring 2017 campaign, The Uniform. Richie came to the limelight in 2016 for dating Justin Bieber and featuring in many of his Instagram posts.

Sofia Richie was born in Los Angeles, California, US, on August 24, 1998. She is the youngest daughter of singer, songwriter, and actor Lionel Richie and designer Diane Alexander.

Richie belongs to American nationality and ethnicity wise, she is White. She has a biological sister named Miles Richie and has an adoptive half-sister named Nicole Richie.

Sophia Richie developed her pa s sion for music at a very early age. She learned to sing at age 5 and learned to play the piano at age 7. As a child, she made her appearances at her father’s show occasionally.

By the age of 14, Richie was taking vocal cla s ses from Beyonce’s vocal coach, Tim Carter. She spent a few years at Oaks Christian School before graduating from her neighborhood high school. She used to play soccer at the time.

However, Richie wasn’t able to play soccer after she broke her hip in a Segway accident at the age of 16.

Sofia Richie began her professional modeling career at the age of 14 featuring in the popular magazine ‘Teen Vogue.’ After a year, she signed her first fashion contract with Los Angeles-based swimwear company ‘Mary Grace Swim.’

In addition to her modeling career, Richie also has done photo-shoots for ‘Elle and Vanity Fair.’ She featured on Billboard magazine’s style issue and on the cover of Complex.

Sofia Richie is unmarried, she is just 19 and dating 34-year-old Scott Disick, Keeping Up With The Kardashian fame reality star. Disick is known for his unstable relationship with Kourtney Kardashian, they have three children together.

Richie was romantically involved in a relationship with actor/musician Will Smith's son Jaden Smith in 2012. However, the couple split up after a year.

Following their break-up, Richie went on to date fellow model Jake Andrews in 2014. She made the most headlines after she began dating singer and teen idol, Justin Beiber in 2016. Sadly, the relationship did not last long, as the two broke up in late 2016.

She was then linked to the model, Brooklyn Beckham for a few months. Brooklyn is the son of English power couple, David Beckham and Victoria Beckham

Richie started dating TV personality, Scott Disick from earlier in 2017. The couple sparked dating rumors during the Cannes Film Festival in May 2017. They were seen together in  Miami kissing each other. Richie also shares pictures with her current boyfriend, Disick on Instagram.

Besides, Richie allegedly hooked up with Anwar Hadid in 2016.

The teen fashion model, Sofia Richie, has earned a considerable amount of money from her career. She has signed contracts with modeling agencies like Mary Grace Swim and Select Model Management.

Richie has an average height of 1.65m (5.5f). As a professional fashion model, Richie receives an annual average salary of more than $662K, as of December 2017.

Sofia Richie's current net worth is $3 million. She also owns a Land Rover LR4 SUV worth around $55.5K.