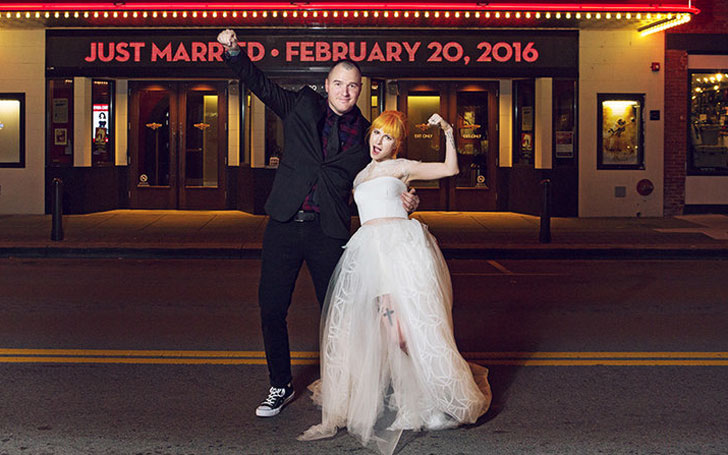 It's the news about the wedding of two musicians, 28 years old Hayley Williams and 35 years old Chad Gilbert.

Paramore singer Hayley Williams and her longtime boyfriend New Found Glory guitarist Chad Gilbert sealed the holy bond in 2016 in front of 50 people inside the Franklin Theater in Nashville.

How was the wedding?

As mentioned earlier, the wedding was held at the Franklin Theater in Nashville in front of 50 people on February 20, 2016.

With 50 peoples in the wedding, there were a lot of photos posted on social media of the bride and groom as they exchange the vows, danced, kissed and looking very much in love.

The couple dated for about 8 years since 2008 and were engaged in December 2014. They applied for the wedding license in January 2016 in Tennessee.

The bride wore white chiffon Vera Wang wedding dress along with a pair of Doc Marten Jadon boots while the groom looked great on a sported an all black suit and a tartan Ben Sherman shirt.

Then how was it before the Chad and Williams were husband and wife?

The two musicians were dating each other after they met in the year 2008. Then after having an affair for six long years, they finally got engaged in new years of 2014.

Chad was the one who popped the big question going into his knees on the Christmas along with that he also made the engagement public posting on his PDF.

After the engagement was public there were congratulations from the couple's close friend and some famous celebs like Taylor Swift, Katy Perry and so on.

Also read: Katy Perry trying to save the relationship with Orlando Bloom

Now, they are married and are happy living together. What is Willams doing now?

What is Williams doing now?

American rock band Paramore has just released a music video for the soundtrack Hard Times directed by Andrew Joffe. The song features a video set with 80s-inspired and soft neons graphics in line with the album's artwork.

Along with the release of the new music video, there was the announcement of the band's first new album in four years titled as After Laughter and they also announced their upcoming European tour in June.

The tour will have shows across the UK, Sweden, Norway, Germany, France, Finland, Hungary, Czech Republic, Austria, and Netherlands.

There are a lot of good news going on for Williams and her band Paramore as they are back with their band member, they have a new album and she has been married for a year. Congratulation Paramore!!!!