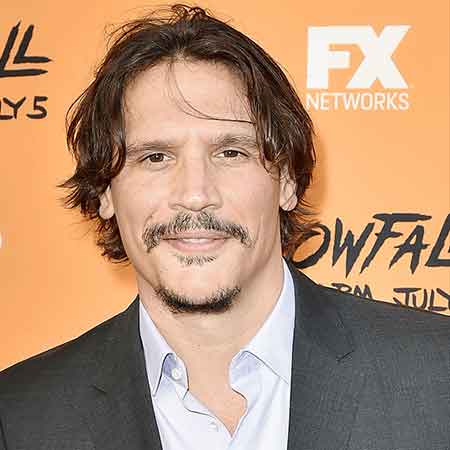 Spanish actor Sergio Peris-Mencheta is in showbiz for over two decades now. So far, the actor has worked on numerous movies like Secret Agents, Resident Evil: Afterlife, Love Ranch among others. For his appearance in the successful movies, Mencheta shared the screen with the Hollywood actors Wentworth Miller, Kim Coats, Spencer Locke, and Milla Jovovich. Alongside his decorative acting career, the actor Mencheta is leading a blissful family life with his longtime girlfriend Marta Solaz and their two children.

Sergio keeps his personal life very private thus, there is no information about his family, parents, and siblings.

Sergio Peris-Mencheta began his acting career as a theatre artist. Since the beginning of his professional acting career, the actor has worked on several movies and television series. In the year 2003, he remarkably appeared on the big screen in the French movie Les Marins Perdus.

Afterward, the actor starred in the 2004 Spanish drama film Earth's Skin as Pablo. The same year he was cast as Raymond on the French crime movie Secret Agents. Then in 2006, he worked on the Spanish/Italian biographical film The Borgia. Mencheta then did a French-Spanish feature film His Majesty Minor in 2007.

In 2010 Sergio Peris-Mencheta then starred in the popular American 3D action horror film Resident Evil: Afterlife. In the movie, he appeared in the lead role of Angel Ortiz, a survivor in Los Angeles. Mencheta was cast alongside well-known Hollywood actors like Wentworth Miller, Milla Jovovich, Ali Larter, Kim Coates, and others.

Continuing the successful journey, the actor appeared on the  American drama film Love Ranch in the same year 2010. The movie is based on the real-life of Joe Conforte, owner of Mustang Ranch and his wife Sally Conforte. In the movie, Mencheta played the role of a professional boxer Armando Bruza.

In 2017, the artist went on rocking the small screen from the American crime drama television series Snowfall. In the FX channel series, Mencheta played the lead role of the character Gustavo Zapata.

Sergio will be seen in an upcoming American Romantic drama film Life Itself. The movie is directed by Dan Fogelman and is set to release on the 21st of September 2018. Sergio will be seen as the character Javier. In the film, we'll see other popular actors like Oscar Isaac, Olivia Wilde, Olivia Cooke, and others.

Sergio Peris-Mencheta is a skilled actor in some popular Spanish and American movies. With incredible acting skills, the star is paid a handsome amount of money, however, his exact net worth is under review. Being one celebrated actor, he definitely has his net worth of $million.

Sergio Peris-Mencheta is in a serious relationship with Spanish actress Marta Solaz. The couple is together since the year 2009 and is cherishing their togetherness since then. Form the relationship, Mencheta and Solaz are parents to their two children; a son born in 2012 and another child born in October 2014. He is leading a blissful and low-key family with his girlfriend Solaz and his children.

Previously, the actor dated a Spanish actress Silvia Abascal. Sadly, things didn't work out between the two and the couple parted their ways after a few years of togetherness.

As the actor is very private regarding his personal affair, there is not much information about their relationship, however, the two now moved on and are happy with their own partners.

Mencheta stands at an average height and has an attractive body.