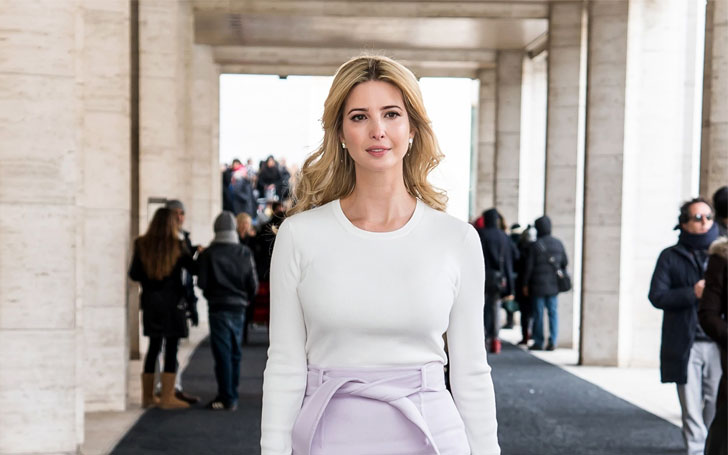 President Donald Trump's daughter Ivanka Trump will be taking a position as an unpaid federal employee in the Trump administration, one that is already being accused of nepotism.  White House revealed the news at the end of March 2017.

Ivanka Trump appeared in an interview with the CBS This Morning's host Gayle King to talk about her new role in the White House.

And possibly misunderstood the word 'Complicit', a word that has been used by critics to describe her and her husband's involvement in Trump's policy over these past few months.

Not only her move to become the President's advisor but also her interview was heavily criticized. Once she is an official federal employee, Ivanka Trump would require being under White House ethics and laws.

Ivanka Trump with her father and POTUS Donald Trump

Turns out Scarlett Johansson didn't agree with Ivanka's interview as well. Note that Johansson has already featured in a parody ad on SNL for a perfume called 'complicit' starring as Ivanka Trump.

Talking to Arianna Huffington in New York at the Women in the World Summit, referring to Ivanka's CBS This Morning interview, Scarlett said

"I've been thinking a lot about Ivanka Trump actually, very recently. I'm sure you saw the interview she did with Gayle King yesterday. It was kind of baffling, I have to say, really baffling,"

"You can't have it both ways, right? If you take a job as a public advocate, then you must advocate publicly, right?

Scarlett Johansson went on to add and make the audience laugh by quoting Ivanka Trump's statement that said that the greatest change she was going to make would be behind closed doors and nobody would know what she did. Scarlett responded to that by saying:

"I thought to myself, 'Well, that’s empowering!' How old-fashioned, this idea that behind a great man is a great woman. What about being in front of that person, or next to that person?

Scarlett Johansson went on to say that Ivanka's silence in the wake of so many socially unfit issues created by the White House was ''really cowardly''.

Upon being questioned about what she thinks of everyone claiming Her and her husband Jared Kushner were complicit to what was happening in the White House, Ivanka answered in a vague manner that made everyone think she didn't even know the meaning of the word.

Ivanka's response to the CBS This Morning's host's query:

“If being complicit is wanting to ... be a force for good and to make a positive impact, then I’m complicit," she said. "I don’t know that the critics who may say that of me, if they found themselves in this very unique and unprecedented situation that I am now in, would do any differently than I am doing''.

The news clearly sparked Twitter reactions, here are some of the best ones:

THe pretty face of authoritarian rule. Ivanka Trump #ivanka Complicit in the madness. She really did promote a Russian app #TrumpRussia pic.twitter.com/PXB9HUtuWn

Maybe next time #Trump will send in #Ivanka, with a @Pepsi.#Syria

Looks like it's getting harder and harder for the White House to get away with unruly decisions now.