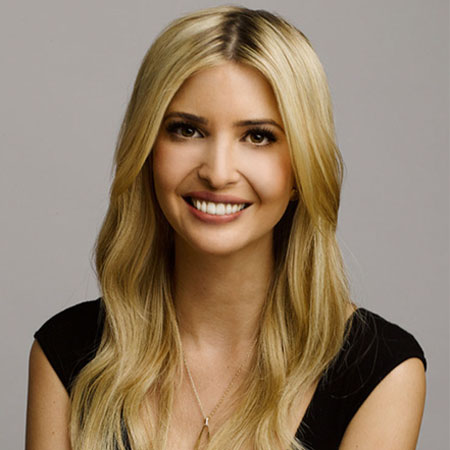 Ivanka Trump is an American writer, businesswoman, heiress, and a model as well. She is an advisor to the POTUS Donald Trump. She has managed her family business for a long time. She is the daughter of Donal Trump, President of the United States and Ivana Trump, a former model.  She is her father's senior advisor and is also the first Jewish member of a First Family, having converted before marrying her husband, Jared Kushner. She married Jared Kushner in 2009 and shares, three children; a daughter and two sons.

She was born on October 30 in the year 1981. Her full name is Ivanka Marie Trump. She was born in New York of the United States of America. Her father’s name is Donald Trump and her mother name is Ivana Trump.

Her father was a business magnate. When she was about 10 her parents got divorced and she had to face it. She joined The Chapin School in New York and later she got graduated from Choate Rosemary Hall situated in Wallingford of Connecticut.

She also joined Georgetown University where she spent 2 years and got transferred to Wharton School of Business at the University of Pennsylvania. She got graduated in 2004 with B.S in Economics.

Although her father was a businessman himself she worked for Forest City Enterprise before she joined the family business. She joined Dynamic Diamond Corp to design jewelry.

She is, at present, the Executive Vice President of Development and Acquisitions at Trump Organization. She also established herself as a model. She got her first picture published as a cover photo in 1997 issue of Seventeen.

She also did some advertisement campaigns for Tommy Hilfiger and Sa s soon. She got herself featured on the cover of Stuff in 2006 and later again in 2007.

She has appeared in Apprentice in 2006. It was her father’s television program. She also hosted Miss Teen USA in 1997 and in 2003 she was featured in a doc u mentary which reflected hardship in growing in one of the world’s most affluent families.

The name of the doc u mentary is Born Rich. She was a guest judge on Project Runway Season 3. She is a multi-talented person. She is also a successful writer. She has written a book named The Trump Card: Playing to Win in Work and Life. The book was published in October 2009.

In 2006, Ivanka Trump dated Topher Grace for a few years. Later after breaking up with him, she started dating businessman Jared Kushner with whom she got married later. She married Jared Kushner on October 25 in the year of 2009 in a Jewish ceremony.

The couple met through mutual friends. They broke up in 2008 due to the objections of Kushner's parents but got back together.

Later in 2011, she gave birth to her first child which was a daughter and named her Arabella Rose. Again in 2013, she was pregnant with a baby boy. In 20009 she had changed herself to Judaism and named herself Yael. Ivanka and her loving husband Jared have been sharing the blissful married life from the past many years with not divorce rumors.

There is quite a rumor that she has undergone surgery but her brother clearly denies the news. She herself has not spoken about the fact officially though.

According to celebrity net worth, Ivanka Trump's net worth is $300 million USD at present. Her husband, businessman Jarek Kushner has a jaw-dropping net worth of $800 million.

Ivanka Trump and Jared Kushner, the daughter and son-in-law of the president who both serves as unpaid senior advisors in the White House, made at least $82 million in 2017.

The couple’s income originates from a wide variety of sources, including investments, trusts, dozens of real estate transactions, a book advance of nearly $300,000 for Ivanka Trump, and stakes in businesses like the nearly $4 million Ivanka Trump earned from her interest in the Trump International Hotel in Washington, D.C.

As per the sources by the New York Times, the ethics filing shows that Ivanka Trump and Jared Kushner earned at least $82 million in 2017, and could have made up to $222 million, compared to an estimate of $89 million to $201 million in 2016.

Ivanka Trump stands at a height of 1.7 meters and weighs around 58 kg. Her body measurement is 34-26-32. She is basically popular in Acting and Modeling. Her neck size is 9.4 while her shoe size is 10. Her zodiac sign is Scorpio.