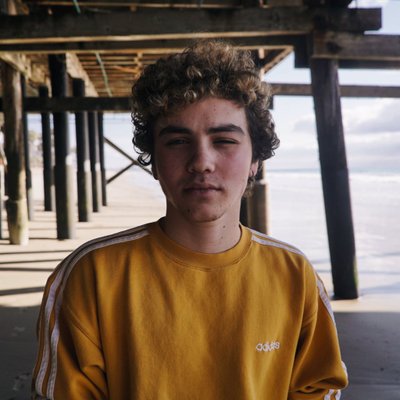 Samuel John Pottorff is an American YouTuber who started to come in the limelight after being the member of the web star group Our2ndLife alongside Kian Lawley, JC Caylen, Ricky Dillon, Connor Franta, and Trevor Moran back in 2009. However, after his team broke up to pursue their own career, Sam created his own YouTube channel and has about 626.88k subscribers as of 2019.

Sam Pottorff was born Samuel John Pottorff on October 19, 1995, in Laguna Beach, CA under the zodiac sign Libra. People born under this zodiac sign have the personality of peaceful, fair, and they hate being alone.

He holds an American nationality and belongs to mixed ethnicity of Turkish, Palestinian and Arab. The details of his parents are not revealed.

He first started his career as YouTuber with his friend Kian Lawley when they were in high school. However, he was catapulted into the spotlight with the channel 'our2ndlife' which Sam co-created with Kian Lawley, Trevor Moran, JC Caylen, Connor Franta, and Ricky Dillon.

They used to upload various types of video like ranging from facts about themselves to DIY experiments that went woefully wrong. Their channel was very popular and had about 2.9 million subscribers. Until in December 2014, they broke up to pursue their individual careers.

What Did Sam Pottorff Do After His YouTube Team Broke Up?

After his team broke up, Sam started working on his own YouTube channel, vlogging along with regular tweets and Instagram updates. He created his channel on May 11, 2014, titled 'pottorff'.

As of January 2019, he has about 641k subscribers on his channel along with 21,737,786 views. The reason why he has many subscribers is that his videos are real and extremely relatable. In April 2015, on his YouTube video Truth or Dare, he featured model Yovanna Ventura.

Sam post his videos twice a week and is very active on Twitter, Instagram, and Snapchat. Sam has even released his own song titled 'When She Calls (feat. Golden)' on January 2, 2015.

In the video shown below, It is the first single Sam Pottorff have ever released. His single is called 'When She Calls (feat. Golden)'.

Sam Pottorff's net worth is estimated to be $500,000. He has collected a decent amount of fortune form his profession. He first joined YouTube in 2009, and co-started a channel named Our2ndLife! Along with his friends. It was a success but they broke up to pursues their own career. After that, he created his own channel in 2014. He has even released his own song in 2015.

In 2014, he brought a Double Charger car which cost around $16,900 for a base model up to about $31,000 for the performance-oriented Charger SRT-8. Sam also has a decent fan following on his Instagram account with over 1.4 million subscribers. It is also one of the major sources of income as Sam can command in the between of $2,892 to $4,821 a promotional post.

Sources report, the YouTuber owns a house in Los Angeles.

Sam Pottorff is single at the moment. Prior, he was married to his longtime girlfriend Rosa Van Iterson. Rosa is an actress, writer, producer and YouTube star who is famous for running the YouTube channel Sam & Rosa.

Rosa and Sam got engaged on September 7, 2016. After their engagement, they uploaded the video on their channel and it quickly went viral.  After a year, they finally tied the knot on March 2017.

Their marriage ceremony was small and only their family members and few friends were invited. Sadly, the couple filed for divorce citing irreconcilable difference within a year in December 2018.

Gotta do another shoot with the amazing @ethan.jolly

Talking about Sam's past affairs he has dated Jessica Carbo, Acacia Brinley Clark, and Mackenzie Lopez.