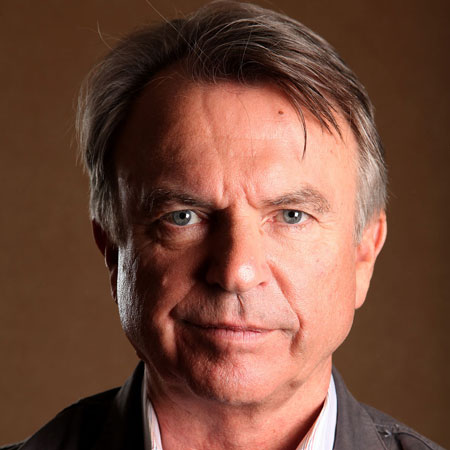 Primetime Emmy Award-nominated actor, Nigel John Dermot Neill is professionally known as Sam Neill. He is popular for his performances in the movies including Dead Claim, Reilly Ace of Spies and Own III: The Final Conflict. He made his movie debut in the year 1975 from the movies, Landfall, and Ashes. As of 2018, he worked as Captain David Hawthorne in The Commuter and voiced Tommy Brock in Peter Rabbit.

Neill has been married twice. He has one daughter, one stepdaughter two sons from the previous relationship.

Sam Neill was born Nigel John Dermot Neill on 14th September 1947 in Omagh, Northern Ireland under the birth sign Virgo. Neill is British by nationality and belongs to Caucasian ethnicity. He is the son of Priscilla Beatrice and Dermot Neill (was an army officer). When he was born, his father was stationed in Northern Ireland serving with the Irish Guards.

In 1954, Neill along with his family moved to New Zealand where he attended Christ’s College, the Anglican boys’ boarding school.  He then studied English literature at the University of Canterbury where he made his first exposure to acting. Later, he graduated with a BA degree in English literature from the Victoria University.

Neill does not like to be called by his name, Nigel because he felt the name means, ‘’a little effete for… a New Zealand playground’’ so, he chooses the name ‘’Sam’’ at school.

Sam Neill made his movie debut in 1975 from the movies, Landfall, and Ashes. In 1977, Neill appeared in the lead role in the movie, Sleeping Dogs which is based on the book Smith’s Dream by C. K. Stead.

Neill then worked in numbers of movies like The Journalist, Possession, From a Far Country, Ivanhoe, Enigma, Plenty, For Love Alone, The Good Wife, Dead Calm, The Piano, Restoration, Victory, The Dish, Little Fishland, A Long Way Down among others. Particularly, he is famous for his roles in:

As of 2018, Neill worked in two movies, The Commuter as Captain David Hawthorne and Peter Rabbit as Joe McGregor/ Tommy Brock.

Neill made his TV debut in 1980 from the miniseries, Lucinda Brayford which is based on a novel by Australian author, Martin Boyd. Two years later, he worked in TV film, Ivanhoe. In 1983, he appeared in miniseries, Reilly, Ace of Spies. His performance in the miniseries was highly appreciated by both fans and critics.

Neill then worked in various TV series, Amerika, The Simpsons, In Cold Blood, Stiff, The Triangle, Jessica, Crusoe, Happy Town, and Old School among others. He, however, is popular for:

Sam Neill has been nominated for several awards. Some of them include:

Sam Neill has an estimated net worth of $18 million. He has appeared in numbers of movies that made an impressive collection at the box office.

Neill owns the largest liquor retailers in New Zealand, Neill, and Co. He has several homes in Wellington, Sydney and New Zealand.

Sam Neill has been married twice. In 1987, Neill tied the knot to Lisa Harrow. Harrow is a popular actress well recognized for her roles in British theater, films, and television. In 1983, the couple welcomed their first child, Tim Neill, an electrician. Their relationship did not last long and divorced in 1989.

In 1989, Neill married for the second time with make-up artist Noriko Watanabe with whom he shares a daughter, Elena Neill who was born in 1991. As of 2018, he was rumored to be dating Australian journalist, Laura Tingle. They, however, have not revealed their relationship to the public.

He also has a step-daughter from his second wife’s previous relationship. In his early twenties, he fathered a son, Andrew but gave him for adoption. He said,

‘’My first son, Andrew, was given up for adoption when he was very small. I was quite small, too- in my early twenties. I didn’t see him for 25 years and then we went looking for each other.’’

The father and son met after 25 years and their reunion was ‘’much more grown-up.’’

In an interview on the Australian talk show, Enough Rope, he told that his stammering affected his childhood and used to hope that people would not talk to him so that he would not have to answer back. He stated,

‘’I kind of outgrew it can still… you can still detect me as a stammer.’’

In 2002, the University of Canterbury awarded him an honorary Doctor of Letters.

Here is the video, where Sam Neill talks about his character in the movie, Thor: Ragnarok: