Canadian-born actor Ryan Reynolds has finally announced the birth of his third child with wife Blake Lively. The 42-year-old Deadpool actor took to his Twitter on Wednesday, 16th October, to announce the arrival of their little bundle of joy.

Reynolds shared a photo of him with his wife and their newborn child in British Columbia, however, the face of the newborn was blurred out, and a smiley face was drawn over her face. In the caption, Reynolds wrote, "I love B.C." He further added,

I want my daughters to experience the same natural playground I grew up in.

I love B.C. 🇨🇦 I want my daughters to experience the same natural playground I grew up in. On Oct. 21, the candidate you vote for will SHAPE CLIMATE POLICY. I’m proud of the climate progress made the last 4 years. Click https://t.co/gJ8wvRwD2y for voting info. #Capilano pic.twitter.com/a3itOeIqQx

Reynolds' confirmation comes to a couple of weeks after PEOPLE claimed the lovebirds welcomed a baby secretly. However, the outlet didn't mention the sex and name of their newborn child. Reynolds and Lively, 32, also parent two other daughters James, 4½, and Inez, 2½.

Back in May, Reynolds and Lively announced they were pregnant with their third child during the premiere of Pokemon: Detective Pikachu. Blake flashed her growing baby bump in a fitted yellow dress. 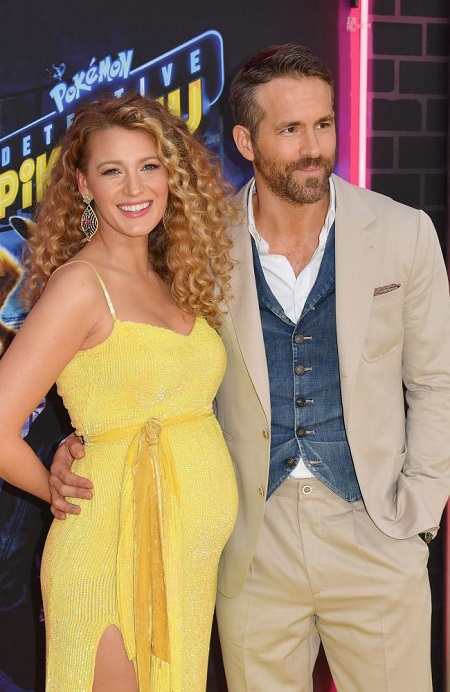 Ryan Reynolds and Lively have been together since 2010 when they met for the first time on the set of Green Lantern. At the time, Reynolds was having a tough time due to his ongoing divorce with actress Scarlett Johansson.

Ryan and Blake started dating shortly after their first meeting, however, they kept it a secret until October 2011 when Holly Scoop confirmed they were in a relationship. Nearly a year later, the couple officially became husband and wife. Reynolds and Lively tied the knot on September 9, 2012, in an intimate wedding at the Boone Hall Plantation, Mount Pleasant, South Carolina.