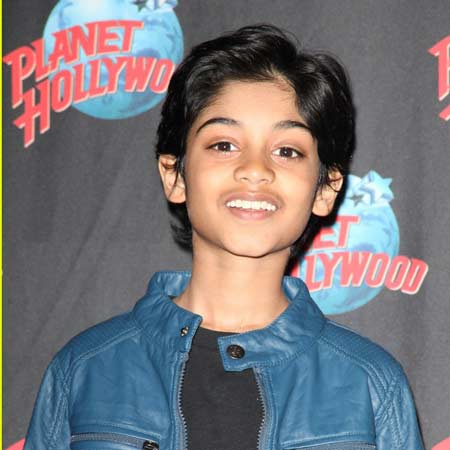 American child actor, Rohan Chand made his acting debut in 2011 in the movie, Jack, and Jill. He caught the attention of a casting director while playing basketball. Later, the director convinced him for the audition and ultimately he won the role. Chand then worked in several movies like Lone Survivor, Bad Words, and The Hundred-Foot Journey. He also appeared in an episode of Homeland. As of 2018, he is working on the upcoming adventure fantasy movie, Mowgli where he will play the lead role.

Rohan Chand was born to his Indian decent parents on 24th July 2003 in New York City, New York under the birth sign Leo. His father, Rob Chand (IT professional) and mother raised him with his younger sister in New York.

At the age of 6, while he was playing the basketball, he caught an eye of a casting director (the mother of another child playing basketball with him). The casting director then encouraged him to give an audition for a role in the movie, Jack, and Jill. Chand ultimately got the role of an adopted child, Gary Sadelstein. He spoke about the experience,

“I was playing baseball, and all the moms had come out to the practice. One of the moms was a casting director for all of Adam Sandler’s movies. She came up to my parents and said, ‘Wow, I think your kid would be pretty good for a movie.’ My parents were like ‘What? He doesn’t even know how to read yet.??”

The same year, he made his TV debut from an episode of Homeland called, Crossfire as Issa Nazir (the young son of the terrorist). The series starred Claire Danes, Damian Lewis, Morena Baccarin, and David Harewood.

CAPTION: Rohan Chand in one of the scenes of Jack and Jill. SOURCE: Rank

In 2013, Chand appeared as the young son of Mohammad Gulab, played by Ali Suliman in the biographical war drama film, Lone Survivor. The same year, he played the role, Chaitanya Chopra in the black comedy film, Bad Words with Jason Bateman, Kathryn Hahn, and Allison Janney.

CAPTION: Rohan Chand in one of the scenes of Mowgli. SOURCE: MId-Day

Chand then worked in The Hundred-Foot Journey (2014) and made the cameo in 2017’s movie, Jumanji: Welcome to the Jungle. As of 2018, he is working as the main character, Mowgli in a live-action adventure fantasy movie, Mowgli. The movie starred, Christian Bale, Cate Blanchett, and Benedict Cumberbatch.

Rohan Chand has an estimated net worth of thousand dollars, however, the amount is still under review. His major source of income is his acting career. Here is the list of his movies that made an impressive box office collection:

As per some sources, Chand made $160k from his first film, According to the court doc u ment, Chand will earn a double salary every time Warner Bros. options a sequel for the potential franchise. If the sequel goes forward, Chand will potentially make over $2.2 million.

In the year 2017, the young actor played the role in the super hit movie Jumanji: Welcome to the Jungle which became the instant hit at the box office grossing over $962 million.

The young and talented actor, Rohan Chand became a pro at a very early age. His amazing acting skills helped him to get listed among one of the best actors under twenty years of age in Hollywood.

He is quite close to his family. He often shares beautiful snaps with his parents spending time in various places.

A very inspirational night @cnnheroes. What amazing individuals were honored tonight. Thanks @kellyripa and @andersoncooper for being terrific hosts

Chand is not active on social media. Some of his hobbies are playing basketball and acting.

Here is the video which shows Rohan Chand's bio: