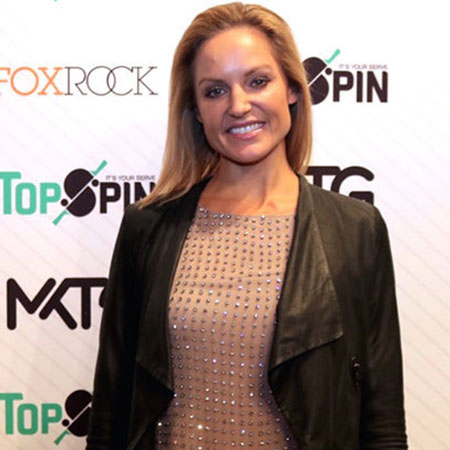 Rebecca Haarlow is a presenter and host/reporter of NFL Network. She also works as a sideline reporter for Big Ten Network and Fox Sports Net. During her high school days, she was on a track team and was also able to score the second-highest mark in Princeton history with a score of 4,700 in 1999.

She Was Sports Enthusiast

Rebecca Haarlow was born on December 20, 1978, in Chicago, Illinois, under the birth sign Sagittarius. People who are born under this sign have the personality of generous, idealistic, great sense, and humor.

She grew up in Chicago and went to Hinsdale Center High School. As a schoolgirl, Haarlow was an avid athlete and set records in many school level competitions. She finished eighth in the 800-meter medley relay and second in the 100 high hurdles, in 1996 and 97 respectively.

After her graduation from high school, she attended Princeton University. She holds American nationality and regarding her ethnicity, Rebecca is a White.

Rebecca began her career as a Public Relations Coordinator for Silicon Valley Sports and Entertainment in 2003. She worked on that position for around 4 years and later became the Sideline Reporter for the Portland Trail Blazers in 2007.

In 2011, she joined NFL Network at the beginning of the 2011 NFL season and worked as a news anchor. She started working at NFL Network as well as a sideline reporter for the FOX Sports Network.

On September 6, 2013, she joined MSG Network and worked as a reporter of New York Knicks telecasts, replacing Tina Cervasio who was a previous reporter of MSG Network.

Did She Play Any Sports?

Back when she was studying in High School she joined a Track team and was able to win six Cla s s AA state track and field medals. In 1996, she finished at eight in the 800-meter medley relay, eight in the 400 relay and sixth in the triple jump.

Furthermore, in 1997, she finished second in the 100 high hurdles, fifth in the 300 low hurdles and sixth in the triple jump. Later while she was at University she scored 4,700 in the 1999 Ivy League Heptagonal Outdoor Championships. Her score was the second-highest mark in Princeton history finishing in third place with that score.

Rebecca Haarlow has an estimated net worth of $500,000. She was able to earn a decent amount of money from her professional career as a reporter. She has been working as a reporter since 2003 and was able to work for many big network companies which include Fox Sports Network, MSG Network, and NFL Network.

According to the source, the average salary of a reporter/journalist is around $39,484 with a median bonus of $1,955. Their average salary usually starts from $24k to $72k.

Rebecca usually never talks about her personal life and keeps it away from the media. Though there are some rumors of her being married and living in Chicago with her husband, Rebecca never addressed the rumor.

Um hi, @kyle_lowry7 just won the hat game. That and he had me laughing when he said he likes what @deandre brings to the @nyknicks but also thinks he looks ‘weird’ in a new uniform. Thanks for the time, Kyle, always a pleasure. Next up? Knicks in #TheLand pregame starts at 6:30 on @msgnetworks #theREALstory {: @mfarsi }

Looking through her Instagram, she is often seen with a mysterious guy and it is still a mystery whether that guy is her husband or boyfriend or just a friend. Since Rebbeca does not share about her private life, it is quite hard to detect her life.

Rebecca is also a dog person who has a pet puppy named BossMand. She frequently shares beautiful pictures of her dog on her Instagram account. The reporter currently resides in Chicago, New York.

In the video shown below, Haarlow on duty as a reporter of TNT Sports on the NBL Championship.