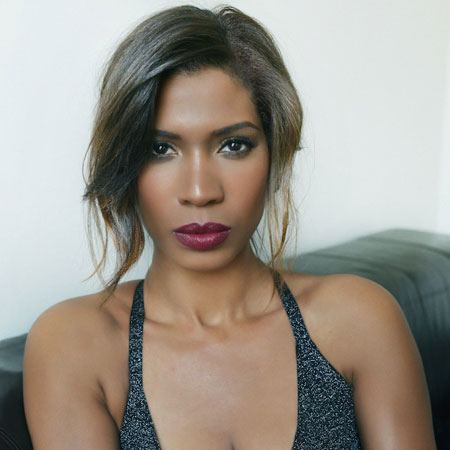 Widely known for her role in the movie The Other Woman, Raushanah Simmons is an American actress, writer, and producer. She is also known for her work in the movies Annie (2014) and The Challenger (2015). Similarly, she portrayed the role of Shopper Shawna in the TV series What Would You Do.

Simmons has also worked in a number of plays, including Menders, The Tempest, Somewhere Safer, A Woman of No Importance, Mother Courage, In the Red and Brown Water, and much more.

Raushanah Simmons was born on December 31, 1969, in New York, United States of America under the birth sign Capricorn. She holds American nationality and belongs to the Afro-American ethnicity. She was raised in her hometown New York along with her parents.

Raushanah Simmons started her professional career appearing in the television series Sex and the City, in 2004. The sam year, she appeared as Prince’s Girl on the American sketch comedy television series, Chappelle’s Show.

In 2008, she starred in a short film named B.S.I. The following year, she played as Shopper Shawnain TV series, What Would You Do?, starring Yuval David, Diana Henry, Vince August, Jeremy Holm, Traci Hovel, Ha s san Goding, and many more.

Simmons then busy with others movies and television appearances before she got her major breakthrough in a 2014 successful movie The Other Woman alongside Cameron Diaz, Kate Upton, Leslie Mann, Nicki Minaj, and Nikolaj Coster-Waldau.

In 2014, she worked in three movies, The Father's Love as Tricia, Bag Man (Short) as Mother, Annie as YaYa L'Occitane, and in an episode of TV series, Person of Interest as Lila Rones.

Prior to acting in films and televisions, she also worked in a number of theatrical plays, including Woman of No Importance, Menders, The Tempest, Somewhere Safer, Mother Courage, In the Red and Brown Water, and among others.

Raushanah Simmons has garnered a good amount of net worth from her acting career. Though Raushanah’s net worth is yet to be revealed to the media, looking at her significant roles in big budget movies, it can be a s sumed that the actress might have a net worth in six-figures.

Raushanah Simmons is yet to be married. She is currently dating her longtime boyfriend Willberns. The actress has only disclosed her personal life on her social media where she posts a number of pictures along with boyfriend.

Besides, Raushanah is an avid animal lover who has a dog and cat too. She loves to meet new people because she truly believes that she can learn from each and every one of them. She is a sports fanatic who loves to play football, tennis, and basketball. She usually indulges herself in yoga also.