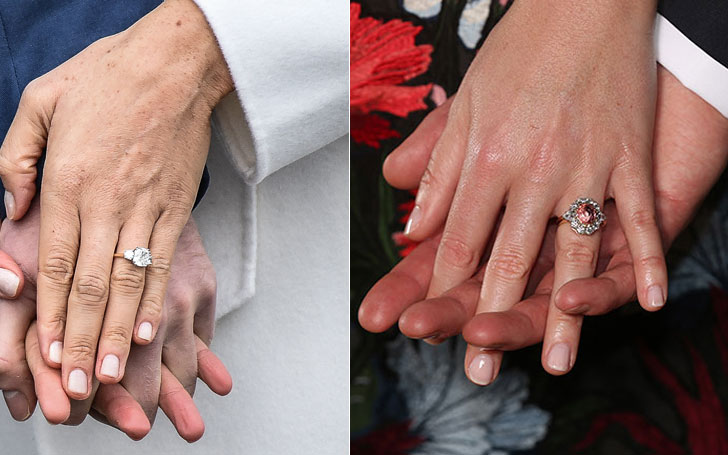 Princess Eugenie revealed her engagement to Jack Brooksbank, the brand ambassador for Casamigos tequila's expansion on Monday and ever since her announcement; she is being compared with the Prince Harry's bride-to-be Meghan Markle in every respect.

Specifically, their engagement ring; price, stone, and the design, is being compared where many online tabloids have mentioned that Princess Eugenie's engagement ring is double the value of actress and Prince Harry's fiance Meghan Markle.

Princess Eugenie's pink padparadscha sapphire ring, surrounded by diamonds, is analogous in style to the ruby ring her dad, Prince Andrew gave to her mother, Sarah Ferguson in their engagement in 1986.

The Gem expert from the television show Posh Pawn has estimated the value of Eugenie's ring at $140,000 which is around double the estimated value of Markle's ring.

The Gem experts have estimated the three-diamond ring that Prince Harry popped the question to his girlfriend with to be worth around $70,000. The Prestige Pawnbrokers' Deborah Papas told The Sun,

Like her mother, the Duchess of York and indeed Princess Diana, Eugenie’s ring has a center oval precious gemstone and this one certainly has not disappointed.

It is a padparadscha sapphire surrounded by 10 brilliant cut diamonds and two pear cut diamonds to give an edge to the standard classic cluster. Padparadscha is the name given to the corundum gem that bears a mixture of red and yellow, a sort of cross between a ruby and yellow sapphire.

The President of WP Diamonds, Andrew Brown said, "Meghan Markle's stunning ring appears to be a 3-carat cushion cut diamond with two side diamonds flanking the center stone at approximately 0.5 carats to 0.75 carats each.''

Whatever the cost of the two engagement rings be, they are undoubtedly more than the price for both Meghan Markle and Princess Eugenie. Prince Harry and Meghan Markle are set to marry in May 2018 while Eugenie has announced she will be tying the knot in Autumn 2018.