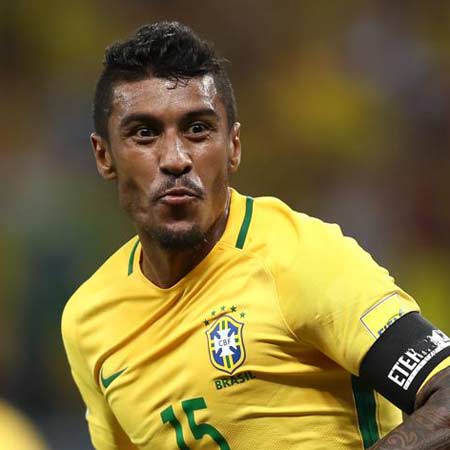 The Brazilian superstar Paulo Bezerra Maciel Junior is widely known as Paulinho and plays as the midfielder for the giant Spanish club Barcelona and Brazil national team. He has been described as the box-to-box midfielder with his powerful running and good movement in the box. He also offers a useful presence in the set piece situation at both ends of the pitch.

The versatile Brazilian professional soccer player, Paulinho was born on 25 July 1988, Sao Paulo, Brazil. He is known for his ability to seamlessly fit anywhere in the ground. As of 2018, he plays for FC Barcelona in the Spanish league.

Since 2004, footballing days started for the prodigy when he joined Pao de Acucar's youth team. After, being excluded from the senior side, he made his professional debut by joining FC Vilnius at the age of 18. Playing two years for the club, Paulinho appeared in 38 games and scored 5 goals. In late 2007, Vilnius was relegated to the second division after which Paulinho also left the club and signed with Ekstralasa side LKS Lodz.  Following one season in Poland, he made 17 league appearances and returned to Brazil.

CAPTION: Paulinho at the time he defended the Audax-SP; participated in the team that SOURCE: About Me

In 2009, Paulinho again moved on to join Serie B side Bragantino. Playing for Bragantino, he drew the attention of Sao Paulo club, Corinthians which later led to a contract.

On 30 May 2010, his first league goal came for the club, coming off the bench to score Corinthians's fourth goal sealing a 4-2 win over state rivals Santos. He eventually went on to win competitions such as 2011 Brasilerirao and 2012 Copa Libertadores, cementing himself as the hero of his club.

On 6 of July, Tottenham confirmed Paulinho's signing after a successful completion of his medical for the fee reported under £17 million ($22,733,165). It became the club's record transfer fee. Paulinho made his League debut against Crystal Palace on 18 August 2013, eventually being Man of the Match in which Tottenham won 1-0.

CAPTION: Everything you need to know about our new signing: Paulinho was voted as Spurs worst player in history SOURCE: Champions League

On 30th of June 2015, Paulinho joined the Chinese Super League side Guangzhou Evergrande for €14 million (£9.9 million) signing a four years deal. He was signed by his former manager, Luiz Felipe Scolari. He made his first debut in a 2-0 away victory against Changchun Yati, coming on as a substitute in the 78th minute for Yu Hanchao. He scored his first goal with a 35-yard free-kick in the first league of AFC champion knock-out stage 2015.

On August 14, 2017, Barcelona announced a deal with the Guangzhou Evergrande for the purchase of Paulinho for €40 million ($46,826,200). According to Guangzhou, Barcelona made several unsuccessful bids before activating his release clause.

He made his debut for Barcelona in 2-0 won against Alves on 26 August 2017, coming on for Andres Iniesta in the 87th minute. Paulinho scored his first goal against Getafe in 2-1 win coming on for Ivan Rakitic in the 77th minute. His consistent performance earned him a place as the starter in the squad. In Barca's first match against Levante, Paulinho scored a goal in injury time in 2018, ending the match in 3-0. For Barcelona, he has scored 9 goals in 49 appearances.

On 14th of September 2011, Paulinho made his first debut for Selecao in the first leg of 2011 Superclasico de las Americans against Argentina in Cordoba which ended in a goalless draw.

His first international side goal came against Argentina on 20th September 2012, when he netted Brazil's equalizing goal in the first leg of 2012 Superclasica de las Americans.

Paulinho was selected by Luiz Felipe Scolari for 23-man Brazil squad including Neymar and Marcelo for 2013 Fifa Confederation Cup held in his home country. He scored his second goal against Japan in a 3-0 victory.

In the qualifiers for 2018, World Cup Paulinho scored his first ever career hat-trick in a match against Uruguay. Since then he was named in the Tite's final 23 man squad for World Cup 2018.

Paulinho is a happily married man. He tied the knot with his long-term girlfriend, Barbara Cartaxo in a private ceremony in the presence of their family members and close friends.

Paulinho fathers a daughter whose name is yet to be made public. He expecting his second child with his beautiful wife.

Here is a video showcasing skills of Paulinho.