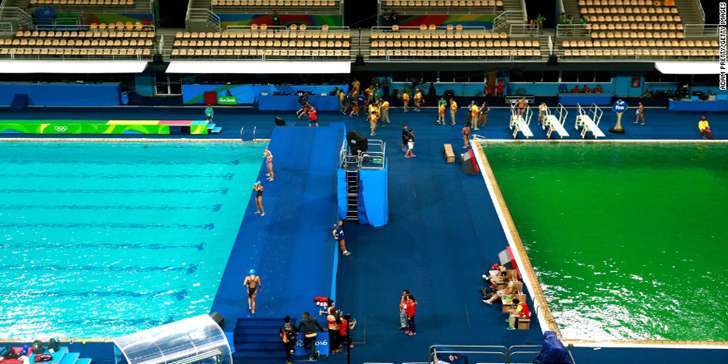 During the opening ceremony of Rio Olympic 2016, organizers were talking about the greenery and green environment. Maybe they are not talking about the Diving pool at the Maria Lenk Aquatics Centre. People were shocked how water can change its color to such an unusual hue.

But on August 9, the water in the pool changed its color where the divers for the Women’s 10-meter platform competed.  Later, A Rio spokesman clarifies the reason behind the changing water.

All this happened because of chemical imbalance in the pool water caused by too many people using the pool and also the proliferation of algae caused by the heat of lack of wind said the Rio 2016 Organizing Committee.

In the statement released by the committee, the water was tested and was no risk to athletes and the diving Pool should be back to its usual color for the next events on august 10, Wednesday.

The water quality at the Maria Lenk Aquatics Centre was tested and there were no risks for the athletes. We are investigating the cause.

Some of the reaction of people in social media after pool water changed unusual hue.

Just waiting for Shrek to come out of the swamp that is the Rio diving pool!#Rio2016 #diving #GreenPool #BBCRio2016 pic.twitter.com/EzMsohFBzJ