OMG! A four year kid looks of eighty years old because of a disease. Find out more about the disease 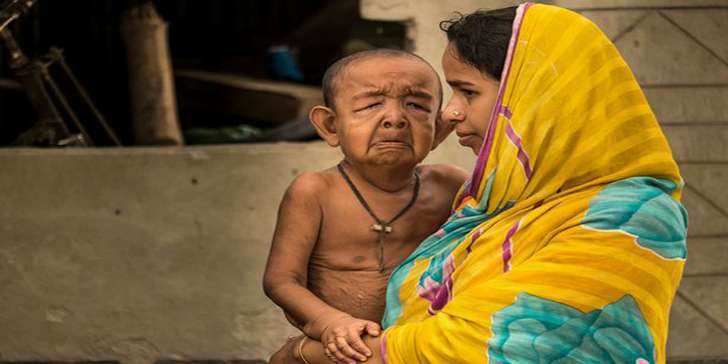 When you first hear or read this news, you may not believe and have a question in your head, how can a Baby of Four years old turn into 80 years old? That is ten times from his normal age. But this is a bitter truth of Eight years old boy who is suffering.

A boy named Bayezid Hossain from Bangladesh is four years old boy but resembles an 80 years old man due to his rear health condition. He has swollen face, shapeless skin, and achy joints, and looks a bit different from other children of his age. He suffers difficulties passing Urine.

Bayezid Hossain suffers from Progeria which causes the rapid ageing and this disease patient normally die from heart attacks and don’t live past 13 years old.

His Mother, Tripti Khatun, Said his full set of teeth were grown up when he was just 3 months old but now his teeth are already weak and broken like an old man. It is painful to see our child suffering from the disease we cannot treat. We are helpless. He has a mind of a child but a body of a man. Other children are afraid to play with him.

At the time of his birth he had no flesh, he only had skin hanging from his bones that looks scary. His parents were unable to pick him up so, they had to put a pillow under his body to hold him in their arms.